San Francisco's Blue Truck Studio clad the exterior of this holiday house in Manhattan Beach, California with cedar siding to tone down its unusual geometries.

Blue Truck Studio added the cladding during the renovation of the property called 30th Street house, which was completed in the 1990s.

The practice used Alaskan yellow cedar to soften the irregular shapes of the 3,770-square-foot (350.2-square-metre) residence, with the aim was to give it a Northern California feel.

The custom-milled wood will grey in colour as it weathers, similar to architecture found in coastal community The Sea Ranch.

"What they had was a house with wild geometry, such as octagon-shaped rooms and triangular spaces," the studio said.

"What they wanted was a home of simple forms and rustic textures, like the ones in the Northern California community of The Sea Ranch."

The studio's redesign maintained the residence's existing geometries, but reconfigured the arrangement of windows across its facades.

It kept the octagonal unit that juts out from one side of the house, the two rectangular volumes that extend outward from the facade and the angular structure that forms part of the house's second level. 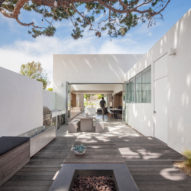 A garage and outdoor shower are located on the rear elevation, while the sides of the house feature gabled rooflines and windows fronted with wooden slats that match the cladding.

"The siding serves as screening in front of some of the home's windows, mitigating sunlight and providing a measure of privacy," the studio added.

In addition to the siding, the studio has also used wood to blend the keyless pivot door with the house and to surround the interior stairwell.

The clients, a family of four, purchased the holiday house to be close to relatives and to enjoy the outdoor activities in the region. Large gathering areas, an outdoor shower and soccer field were added to the house and property to provide space for a number of activities.

The studio converted part of the garage unit into an art studio and play area, and opened up the house's interiors by removing a fireplace from the centre of the living room.

Natural light floods into the interiors through the row of sliding glass doors that open from the main interiors living spaces onto two outdoor decks.

The plan of the second floor narrows in its centre to allow for a patio on one side of the ground floor, which is topped with a slatted wooden roof to allow light to filter in. The roof on the other side is punctured by a skylight.

The slender portion of the first storey forms a walkway that connects two bedrooms with en-suite bathrooms on one end. A third bedroom with an ensuite bathroom is located on the other side.

Manhattan Beach is a coastal Californian city south of Santa Monica. Other projects in the area include a remodelled 1950s bungalow by Edward Ogosta Architecture.

Photography is by Gregg Segal.