Architecture office Spaceworkers has designed the concrete Centro de Interpretação do Românico museum in Portuguese village Lousada to explain the history of Romanesque architecture in the north of the country.

Built on the Romanesque Route – a collection of 58 medieval monuments in the Sousa valley in the north of Portugal – the interpretation centre was created to explain the local architecture to visitors.

Spaceworkers designed the Centro de Interpretação do Românico, which translates as Interpretation Centre for the Romanesque, so that the building would form part of that explanation. The modern concrete building's form is derived from the Romanesque architecture it aims to help interpret.

"Based on the generator concepts of Romanesque architecture in Portugal, the building aims to be a transitional element between the present and the distant Romanesque past," explained Spaceworkers, which is based in Paredes.

"In an austere way, the volumetry contains the principles of unity within diversity, appearing under the form of several volumes with different heights and dimensions, demonstrating the diversity that Romanesque buildings have left us."

The museum is formed of seven cuboid, concrete forms connected by an accessible, glass-roofed atrium.

These concrete boxes are largely plain on the exterior with only the occasional window and the entrance, which is intended as an interpretation of a Romanesque church doorway breaking the geometric forms.

"There are several elements incorporated in the building that connect to the Romanesque buildings where we are inspired," explained Spaceworkers co-founder Rui Dinis. 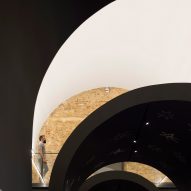 "From the outside we seek to incorporate elements that refer us to the Romanesque, such as the austerity of the facades, the absence of openings, the scale, and at the same time, with an objective relationship, the entrance door into the building is assumed as a contemporary reinterpretation of the typical entrance found in many of the Romanesque religious buildings," he told Dezeen.

The museum's exhibitions are arranged into the seven concrete volumes, which each has a ceiling that takes its form directly from Romanesque architecture.

"Each volume is a distinct exhibition space," said the studio. "To explore the relation between them, it was created an idea of medieval street as a unifying element and generator of life experiences – a cloister – a central body covered by glass that proceeds the entry in each volume."

Spaceworkers chose to build the interpretation centre from concrete as it believes that this material communicates the ideals of Romanesque architecture.

"As in the past, Romanesque constructions were made with the elements available on the site, in this case granite," said Dinis. "Concrete is the stone of our days, and that's why we chose it as the main material in this building."

"We also want to emphasise the austerity of the Romanesque constructions and we understand that the exposed concrete would be the best way to materialise this message," he continued.

Dinis hopes that the building will help all those that visit it to help understand Romanesque architecture in the local area.

"It is important for us that the building establish the connection between today and the distant past of the Romanesque, and that the visitor feels that right from the moment they cross the entrance door," concluded Dinis.

Portuguese architecture studio Spaceworkers was established by Dinis along with Henrique Marques and Carla Duarte in 2007.

The studio previously created an arched exhibition space in a Portuguese church to commemorate a philosopher, and designed a cultural centre inside a 19th-century schoolhouse.