French designer Christophe Gernigon has proposed a concept for suspended plexiglass hoods intended to help allow diners to return to restaurants after the peak of the coronavirus pandemic.

Shaped like large lampshades, the transparent Plex'eat hoods would be suspended above tables. People would sit underneath them while eating and drinking, with the hoods potentially reducing the risk of airborne infection.

"I imagined, during my nocturnal creative wanderings of these months of confinement, a new way of welcoming customers of bars and restaurants in search of outings," said Gernigon, who works in interior design and scenography.

"Though we would have preferred not to arrive at this point, it is better to consider aesthetic, design and elegant alternatives that guarantee the rules of social distancing."

Plex'eat's proposed dimensions are 80 centimetres by 70 centimetres, although Gernigon said he is also developing larger models for couples and whole families to sit under together.

Bars and restaurants around the world closed earlier this year to stop the spread of coronavirus. They are now reopening in some areas, but social-distancing rules mean they cannot operate the same way as before.

Gernigon said he came up with Plex'eat as a stylish solution to this problem, which imagines a way people could return to eating out with friends while reducing the chances of spreading the virus. 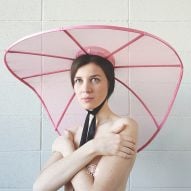 The virus poses a challenge to the hospitality industry, with typical layouts and serving routines making social distancing difficult and research suggesting that air-handling systems have caused transmission between diners sitting far apart.

In addition, the length of time people spend dining in restaurants can potentially expose them to a high viral load, since Covid-19 particles can remain suspended in the air for three hours or more.

Designers and authorities are exploring ways of helping restaurants reopen. Milan's city council has put an open call out to designers to devise way's for the Italian capital's bars and restaurants to re-open safely.

One restaurant in Amsterdam has been running trial events where diners can book a slot in their own private greenhouse and be served by waiters in face shields.

An increasing number of areas are considering allowing restaurants to operate outdoor dining areas where the risk of infection is thought to be lower. American designer David Rockwell has proposed a kit of modules that allow establishments to serve diners on streets and pavements.

MARGstudio, Alessio Casciano Design and Angeletti Ruzza came up with the idea of an inflatable face shield people can wear to go out for drinks with each other, while Production Club is working on a suit with a built-in air system that would allow people to go out clubbing during the pandemic.

Images are courtesy of Christophe Gernigon.