"She never lost her confidence, she always knew that her work was really outstanding," Jiřičná says of architect Zaha Hadid in this new film from Mark and Stephenson, shown for the first time as part of VDF. "She suffered from the lack of understanding."

The footage was shot as part of a documentary that the filmmakers made for the Architects' Journal in 2017 to mark the one year anniversary of Zaha Hadid's death.

This short film shows the architect's work and features her friend Jiřičná speaking of Hadid, whom she had known since she was a student at the Architectural Association (AA).

"We wanted that film to draw on the voices of those who had known Zaha well – her close friends and colleagues, and we paired their voices with buildings which had marked particular moments in her career – the Vitra Fire Station, the MAXXI, and the Olympic Swimming Pool," Mark explained.

The original documentary was one of the duo's first longer films and as their film-making has developed since, Stephenson returned to the project during lockdown and decided to make this short film focusing on Jiřičná. 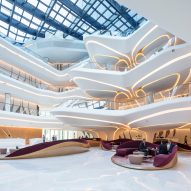 "Hearing Eva speak about Zaha is always very touching and there is a warmth in her words," Mark said.

"I think sometimes with stars we forget about the person behind the work or the image of them and Eva's words really help us to remember this. She knew Zaha from when she was a student at the AA and they had a close relationship so what we hear is really raw."

In the movie, Jiřičná speaks of how Hadid's work kept the spirit of those early school days as it developed.

"Her architecture somehow had everything that she initially put in her very early sketches," Jiřičná said. "It had movement, it had the forms which nobody had ever seen before, it was fluent, it was communicative, it was beautiful."

"She somehow shared her success, her vision, with the rest of the world," Jiřičná concluded.

Zaha Hadid: Words by Eva Jiřičná is the first of three films to be screened in collaboration with Mark and Stephenson.

It will be followed by Practice, a short film that takes an in-depth look at Piers Taylor and his Invisible Studio, on May 27. On Thursday May 28th VDF will screen their film about Walmer Yard, the Peter Salter-designed homes in Notting Hill, London.

She has directed a number of films including the documentary Zaha: An Architecture Legacy(2017) which has been shown at festivals in London, Milan, New York and Miami.

He has been commissioned to photograph and produces films on projects by a wide range of architects and designers, including BIG; Herzog & de Meuron; Assemble; Zaha Hadid Architects; dRMM; Studio in the Woods / Invisible Studio; and Foster & Partners.