The final film from Virtual Design Festival's collaboration with Laura Mark and Jim Stephenson is a meditative look at the Peter Salter-designed Walmer Yard.

Walmer Yard: Architecture for the Senses explores the four Notting Hill townhouses that were crafted by Peter Salter over 13 years.

"This short film is an exploration of the incredible light that passes through the buildings at various times of the day, and of the wider sensory experience they offer," Stephenson said.

"Laura is the keeper of Walmer Yard and so initially we talked about working together on a set of photographs of the spaces that they could use," he explained.

"We planned three consecutive days to do the photographs, and as soon as we started working it felt natural to work on some moving image also, partly because we’ve worked together so much on videos before, but partly because Walmer Yard is such a unique set of spaces."

The film shows the nooks and crannies of the project, from the exterior courtyard to the concrete interiors where details include decorative wood-paneling and black steel staircases.

"The choreography of moving around it, both inside and out, lent itself to small movements of the camera to reveal depth and new views, and the light changes so much throughout the day as well," Stephenson said.

"There was such a clear narrative there, and film is a wonderful medium for creating contained stories."

Mark and Stephenson captured everyday life in the houses, showing people preparing food and families sitting down to dinner, as well as tactile impressions of the buildings themselves.

"A lot of the film focuses on small moments – the light, breeze, materials and rain with the idea to help the viewer build an idea in their mind of what the building does to the senses," the film-maker explained.

"Essentially we were trying to give an audience the tools to build their own cinematic space that represents the experience of being at Walmer Yard," he added. 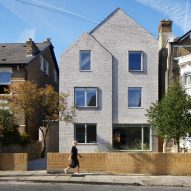 Walmer Yard is Salter, of Salter + Collingridge's, only completed project in the UK and was designed together with associate designer Fenella Collingridge and executive architects Mole. The project won the RIBA National Award in 2017.

It forms part of the Baylight Foundation, which aims to increase the public understanding of what architecture can do.

Virtual Design Festival, the world's first digital design festival, runs from 15 April to 30 June 2020 and is sponsored by bathroom and kitchen manufacturer Grohe.

She has directed a number of films including the documentary Zaha: An Architecture Legacy (2017) which has been shown at festivals in London, Milan, New York and Miami.

He has been commissioned to photograph and produces films on projects by a wide range of architects and designers, including BIG; Herzog & de Meuron; Assemble; Zaha Hadid Architects; dRMM; Studio in the Woods / Invisible Studio; and Foster + Partners.