Graeme Nicholls Architects has extrapolated the form of a former greyhound stadium for a proposed oval of red-brick housing by Ibrox football stadium in Glasgow, Scotland.

The Albion Housing scheme, which would contain 160 dual-aspect apartments, would consist of two four-storey, U-shaped blocks that face each other to create an oval.

Its form is directly informed by a greyhound track that used to occupy the site and local sporting connections as it would be built adjacent to Ibrox stadium, which is home of Glasgow Rangers football club.

"All of our projects use narrative as a key design driver – Form Follows Fiction we call it," explained Graeme Nicholls Architects founder Graeme Nicholls.

"The historical and current association with sports on the site is something we are keen to express in our design for the new development," he told Dezeen.

"Historical maps show that the site contained a greyhound track with a bowl footprint, which we thought would be interesting to express in any new development. This plan form also fits the unusual shape of the site really well."

Albion Housing, which is currently in pre-planning consultation, would be arranged following the model of historic Glasgow Tenements, with two flats per storey accessed by a communal entrance on the ground floor. 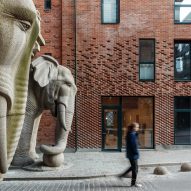 Both the facades within the oval and exterior facades of the blocks are divided into bays reminiscent of early 20th-century stadiums. Each are articulated with an elongated arch with windows arranged inside them.

The red brick that would be used is a reference to the colour of the main stand at Ibrox and the surrounding red sandstone tenement housing blocks.

"The ambition for this site is to create a residential development that is both sympathetic to and celebratory of, the history of the Ibrox area in Glasgow," said Nicholls.

"The historic housing in the neighbourhood is typified by tenemental style perimeter blocks built of red sandstone – quite monochromatic, and with only light decoration/articulation. So, we thought it would be good to do something that shared that DNA."

Nicholls believes that if built this unique project is one that could only exist in this location.

"We wanted to make something appropriate, that could only really exist in this place," he explained.

"I like to make 'slow-cooked' architecture. To drop a lot of ingredients in the pot, and let the flavour of the design emerge. We were certainly taking lots of varied ideas and bringing them together on this one."

Although the scheme is extremely unusual, it has been compared to well-known buildings in Germany, Italy, France and the UK.

"It's interesting to hear people's reaction to the project," said Nicholls. "It seems to remind them of a whole series of varied references, including many we hadn't thought of ourselves."

"We've had people say it reminds them of Bruno Taut's Hufeisensiedlung project in Berlin, Ricardo Bofill's Les Espaces d'Abraxas in Paris, St Andrews Gardens in Liverpool, and of course the Colosseum!"