Built as part of a masterplan to redevelop the Carlsberg Brewery site in the Carlsberg City district in central Copenhagen, Adept designed the housing to continue the local tradition of brick buildings, but with a modern twist.

"The buildings in the area are a mix of historic buildings transformed into modern purpose as well as new residential complexes, office spaces and public functions," explained Adept partner Anders Lonka.

"We wanted to create a design that was almost zipped together with the historic buildings in material, colour and texture – and told a story of what came before, yet had its own modern impression in details and architecture," he told Dezeen.

The five-storey block stands next to the decorative Elephant Gate on the site of a former yeast storage building. One wing of this building, which has a decorative brick facade, was retained and contains 4,130 square metres of office space.

Connected to this block, three new wings have been built around an internal courtyard. These wings contains 58 apartments on the upper floors, with a restaurant, cafe and three shops on the ground floor. 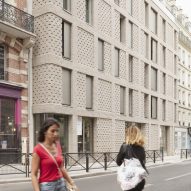 "The listed front of the former yeast storage, with its characteristic clock tower that forms part of Theodora House, is super detailed in its brickwork," explained Lonka.

"An almost flowerish pattern is dotted all over the east facade. We wanted to create a modern pendant to this kind of historic decoration and make it an integrated element, instead of merely a way of laying bond and mortar."

"The creative use of brick decorations in the facades is very common in the Carlsberg City, both in the historic buildings from the 1800 – 1900 and in modern additions to the complex, like the quite amazing Hanging Gardens by Svenn Eske Kristensen from the 1960s," continued Lonka.

"We like to think that Theodora House carries this tradition forward."

The internal courtyard has been designed to dramatically contrast the external facades and many brick buildings found on the brewery site.

At present the facades are white with timber trellising, but in time these will become green walls as plants grow up the timber framework. These green walls and the small park were designed by landscape architect WERK, which also created many of the surrounding squares.

"WERK designed the landscape as a small gem, semi-accessible to the public and we wanted the interior façade to reflect the thought of this hidden oasis in the city," he continued. "The geometric patterns of the facades will in time be green with plants that climb the wooden trellises – and the overall impression will then be much more garden-like."

To access this courtyard Adept designed a series of decorative steel gates that incorporate motifs of historical yeast storage.

Photography is by Rasmus Hjortshøj unless stated.