ArkDes, Sweden's national centre for architecture and design, hosts a virtual 360-degree vernissage for the premiere of its new exhibition Kiruna Forever in the first part of today's VDF x ArkDes collaboration. Tune in from 11:00am UK time for the tour.

The exhibition explores the relocation of Kiruna, a city in the northernmost part of Sweden, which is one of the biggest urban transformation projects in recent history.

The expansion of the city's underground iron ore mine, which is the largest in the world and around which Kiruna was built, is forcing the city to relocate by two miles.

Housing blocks and landmark buildings are being demolished or moved, a third of the population must relocate, and a new city is being formed.

But how do you move an entire city? Kiruna Forever looks at the challenges of the ongoing relocation, as well as those the community has faced from the first industrial settlements and the ones it will face in the future, through over 100 works by architects, urban planners and artists.

The exhibition focuses on questions such as: What is the limitation of natural resources? What happens to residents' identity and security when their homes are demolished? And how permanent are the cities we live in? 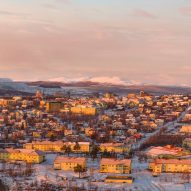 The relocation of the city is ongoing and set to be completely finalised in 2035.

As well as the ArkDes exhibition, there is a parallel exhibition at Konstmuseet i Norr, Norrbotten's new County Art Museum, located in Kiruna. Some of the works have jointly been specially commissioned and are on show simultaneously at both venues.

ArkDes, Sweden's national centre for architecture and design, is a museum, a study centre and an arena for debate and discussion about the future of architecture, design and citizenship.

Its aim is to increase knowledge and cultivate debate around how architect and design affect our lives as citizens, and to influence this change through debate, exhibitions, campaigns and research relating to Swedish and international architecture and design.