Feminist collective Rebel Architette has created the Women Architects World Map as a tool to "detox" architecture from its dependence on "boys' clubs".

The interactive map of women-led architecture practices can be used as a guide to women architects and their practices around the world.

"We want to keep listing exceptional women architects from all over the world as potential participants for events; professional experts active in different fields and leading the way to new opportunities in architecture," Rebel Architette founding member Francesca Perani told Dezeen.

"Our first purpose is to counter the still-popular 'manels' with an open, public, free database. We accept no more excuses for male-only panels."

"Manels," or panels where all the speakers are male, remain an unfortunate part of the architecture industry, where women are still underrepresented at the most senior levels of the highly competitive profession.

"Boys' clubs are still winning the game in the public face of architecture," said Perani.

The interactive Women Architects World Map displays counters with the number of female architects over each country. Clicking on a country zooms in to break it down by region. Each practice is listed with their address and website.

Rebel Architette has built seven profiles for noteworthy women architects to demonstrate how the tool will look with all the practices and individual profiles filled in.

With the tagline "from ego to plural," the feminist collective hopes their new tool can push architecture further away from the cult of the white, male genius.

"Architecture talks always overuse words such as accessibility, inclusiveness, participation. We want architecture to be that, we will not stand for continuing classism, colonialism and gender-related discrimination," said Perani.

"Let's stop the culture of hero-worship and move towards a complete re-establishment of collaborative, plural, intersectional architecture."

To improve the geographic spread of the architects profiled, the collective is collaborating with the Iranian Women Architects, Arquitetas Negras in Brazil, Chile's Mujer Arquitecta, and Women of Prague Public Space in the Czech Republic. 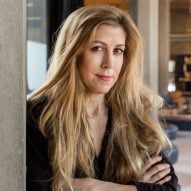 Rebel Architette hopes the project will help people find female architects and help them connect with each other.

In order to defeat the boys' clubs, said Perani, we must "begin with admitting that there is a problem". She highlighted to work of architect Jeanne Gang to close the pay gap in her own practice as a prime example of positive action.

"We would also suggest investigating the presence of women on decisional boards, implementing smart working so that flexible time solution can become popular in favour of work/life balance for both men and women," she said.

"As for 'manels', we are suggesting participants should boycott them and point them out to us."

Rebel Architette formed in Bergamo, Italy, in 2017 after its founding members campaigned to be able to use the official title of Architetta, meaning female architect. Before, only the masculine term Architetto was available.

In 2018, Rebel Architette published an online book, Architette = Women Architects, profiling 365 female architect role models from around the world. The collective was a part of the 2018 flash mob at the Venice Biennale calling for action against gender discrimination in the industry.

"Show respect to women in your workforce" says Jeanne Gang