Today Virtual Design Festival teams up with Braun to present a series of talks and a competition to win a Braun speaker and watch. The collaboration kicked off with a live talk with designer Benjamin Wilson and curator Dr Peter Kapos about the influential brand's vision for design.

Wilson and Kapos spoke to Dezeen's founder and editor-in-chief Marcus Fairs on the themes of times of change and good design.

The conversation probed the history of German design brand Braun, its current products and its vision for the future, as well investigating how design has responded to societal upheavals in the past and how it can continue to do so.

The livestream is part of Braun's takeover of VDF today, which will also include a talk with Ilse Crawford at 4:00pm, as well as a competition in which the brand's LE03 speaker and a BN0265 Chronograph gentleman's watch can be won at 5:00pm.

Wilson, an Australian industrial designer, has worked at Braun since 2003, and has led global communications for Braun's technology and design wing since 2016.

He is director of Das Programm, a research arm of Systems Studio focused on the history of Braun's designs, and has written a foreword for a book that collects the brand's iconic pieces, as well as an extended essay for Phaidon's Industrial Facility monograph on industrial designers. 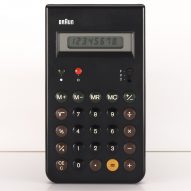 Braun is renowned for its functional approach to design, and counts designer Dieter Rams and his protege Dietrich Lubs amongst its heads of design. The brand's mission to create "honest, unobtrusive, practical devices" helped establish it as one of the most influential manufacturers of the 20th century.

Running from 15 April to 30 June, Virtual Design Festival is the world’s first online design festival. It brings the architecture and design world together to celebrate the culture and commerce of our industry, and explore how it can adapt and respond to extraordinary circumstances.