The digital catwalk show was livestreamed on 22 May via an IGTV video, as Hanifa founder Anifa Mvuemba showcased the looks from her ready-to-wear Pink Label Congo clothing line in the form of 3D renders draped on "ghost" models.

While many would assume the virtual catwalk was a result of the current Covid-19 quarantine conditions, Mvuemba told Dezeen that she has been using virtual figures in her work for quite some time as mockups during the brand's sampling process.

"I wanted to incorporate more of it into our marketing strategy," she explained.

"When the stay home orders from Covid-19 suddenly happened I had already been working on these creations and saw it as an opportunity to innovate and inspire despite the restrictions."

"3D designs kept me sane and intrigued during those times," the designer added.

"I'm always intentional about the shapes and curves of the model," she told Dezeen. "Like our clothing, our 3D models are inspired by real women because we design for real women."

Despite employing 3D models pre-Covid, Mvuemba told Teen Vogue in an interview that she was initially apprehensive of going through with her virtual fashion show in light of the pandemic.

"The news came out about how serious things were and I started to feel a bit anxious about everything going on," she told the magazine.

"I started feeling like maybe it would be insensitive to create and share a new collection online while people were facing very difficult realities." 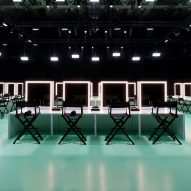 Despite her reservations, Mvuemba decided to go forward with the virtual show – which more than 10,000 viewers tuned in to – in order to make her work more accessible by giving everyone "a front row seat".

"We know that some people may never experience a fashion week or Hanifa showcase, so we wanted to show up for our audience where they show up for us on a daily basis," she told Teen Vogue. "That's when Instagram became the obvious choice."

Soon after the show, clips of the virtual garments were shared to Twitter and other social media platforms and went viral, hailed as "groundbreaking".

The inspiration for Mvuemba's capsule collection came from her hometown in the Democratic Republic of Congo (DRC), and more specifically from the "majestic women" that live there.

She incorporated elements of the country into the garments' detailing, stitching and colour.

"The red symbolizes pain, the blue represents peace, and yellow stands for hope, all colours of the Congo flag," she said.

In particular, the ribbed Kinshasa Backless Mini Dress – named after the country's capital – features a tritone palette taken from the Congolese flag, and is designed to "mirror the strength in the history of [the Congolese] people".

"The A Line silhouette personifies releasing the pain of the past and our backless design invites the peace and hope of the future," reads the product description. "The exaggerated sleeves lay over your fingertips for an added layer of drama. "

Other significant pieces included a wide-leg denim jumpsuit, a white stretch-satin skirt designed to emphasise "the strength in a woman's hips", and the floor-length silk Mái gown used to close the show, which is printed with an image of the Congo River.

"I'm hoping that women will gauge meaning from each collection," Mvuemba told Dezeen. "Hanifa is about more than the clothes. We create for women who are and aspire to be limitless."

"When creating each piece, I was reminded of the stories my mother told me of the women she knew back home in Congo," she said. "Women who suffered great loss but still, mustered every ounce of strength everyday to show up."

"My hope is that this collection inspires all women to stand tall in their power and, like the Democratic Republic of Congo, to use their history, whether pretty or painful – to redesign their future."

Mvuemba also uses her work to shed light on the historic disparities in central Africa, and to raise awareness of the abuse, extortion, and forced labour of illegal coltan mining in the DRC – a mineral used as a capacitor in electronics like cell phones and laptops.

She hopes her work can be "part of the solution".

This aim saw Hanifa launch its Collette t-shirt, in partnership with Responsible Sourcing Network, which will see 20 per cent of proceeds donated to causes that fight illegal coltan mining.

Many fashion brands have been been affected by coronavirus, unable to host any physical shows in which to display their collections.

Italian fashion house Giorgio Armani staged its women's Autumn/Winter 2020 show in Milan without an audience due to the pandemic, while Gucci's creative director Alessandro Michele used his time in quarantine to reflect on how his brand operates, stating that Gucci has cut its number of annual shows from five to two in a bid to reduce waste.