A faux leather top made from pig's blood and shoes made from repurposed lederhosen are among 15 contemporary Austrian accessories and fashion designs being shown at Virtual Design Festival by the Austrianfashion.net initiative.

The platform promotes work from designers who are born or based in the country, and who produce their products both sustainably and locally.

"We believe small scale Austrian craftsmanship deserves a larger platform than it has, as it is wonderfully rich, diverse and proudly marching towards the sustainable," said designer Claudia Rosa Lukas, who curated the Austrianfashion.net programme at VDF.

Several of the designs are made from reclaimed materials, in a bid to champion a more circular economic system.

Brandan Josh's Blaziken trousers are named after a Pokémon and made up of chunks of second-hand jumpers, while the Divided Trousers by Steinwidder are created by ripping apart textile waste and sewing it together in new and interesting ways.

Other pieces explore heritage fabrication methods, such as the leather Kollar necklace by Wilfried Mayer, which mimics the shape of a high-cut shirt collar and is based on the designer's extensive research around classic, Viennese tailoring. 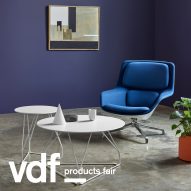 The edit also heavily features native, locally-produced materials such as loden – a dense woolen fabric that was first developed by Austrian peasants to ward off the elements.

Design brand Skarabeos created a detachable inner layer from the material for its unisex Jacket 01, while Germany-based label Agnes Nordenholz used it to line its Hunter bags, which are covered in sheep fur and resemble small creatures.

A number of pieces are distinguished by their unexpected use of animal byproducts, such as the cow horns that embellish Sagan's checked Amaka and Ilorin bags and the pig's blood and gelatine-based faux leather developed by Natalie Zipfel.

Julia Körner opted for the vegan alternative, choosing instead to imitate butterfly wings using a 3D printer to create her Setae Jacket.

Womanhood was another key topic – from the maximalist femininity of Narbon's lace- and bow-laden collection, to Christina Seewald's tongue-in-cheek Shewee clothing, which integrates the female urination device into its design.

Two different designers also hoped to address issues of psychology through their pieces.

The Portable Compulsion bags by Isabel Helf, for example, hope to act as a form of behavioural therapy for people with OCD through their satisfying lock-and-key functionality.

Aeternum's Mourning Jewellery, on the other hand, is designed to act as solace for those grieving the death of a loved one, by giving them a tangible heirloom to hold on to.

Austrianfashion.net is a non-profit organisation that promotes contemporary Austrian fashion design. Virtual Design Festival has teamed up with the organisation to present accessories and fashion designs by 15 designers who were born or are based in Austria and produce their products both sustainably and locally. Explore the other designs here.