The tour followed a live Screentime conversation between the French architect and Dezeen's founder and editor-in-chief Marcus Fairs.

Developed together with Therme Art, Mamou-Mani's amphitheatre was set to be constructed using timber modules that blur the distinction between spectators and performers. 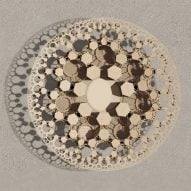 The design was meant to be built at this year's Burning Man, an annual festival which sees the construction of a temporary city in the Black Rock Desert in Nevada, USA.

Rather than burning the structure at the end of the festival, as is tradition, Mamou-Mani had planned to deconstruct it and rebuild it elsewhere.

When the festival was cancelled due to the coronavirus pandemic, Mamou-Mani called on game developers to help him realise the amphitheatre in virtual reality, through a call out on Dezeen.

The Catharsis structure is not the architect's first time designing a structure for Burning Man. He was also behind the main temple for the festival's 2018 edition.

Called Galaxia, the temple was burnt down at the end of the festival, but Mamou-Mani will give Dezeen readers a tour of a virtual reality version of Galaxia as well.

As part of our collaboration with Mamou-Mani for Virtual Design Festival, the architect also shared previously unseen drone footage of the temple.

Mamou-Mani is a French architect based in London whose work uses alternative materials and methods of construction.

He was also part of a panel on using post-plastic materials in architecture and design at the inaugural Dezeen Day.