Boston architecture firm Machado Silvetti has been selected to preserve an 18th-century home in Virginia once owned by a signer of the Declaration of Independence.

The work is for Francis Lightfoot Lee's home in northeast Virginia near Warsaw. Also known as the Menokin house it has fallen into ruin over the decades, and it will be revitalised with a glazed addition by Machado Silvetti.

Lee was one of the 56 signers of the Declaration of Independence that was signed at Independence Hall in Philadelphia on 4 July 1776, in which 13 colonies declared themselves independent of the British Empire, and claimed themselves to be the United States of America.

Lee was one of seven men from Virginia who signed the declaration, and his house was declared a US National Historic Landmark in 1971. Built in 1769 with stone, brick and timber, it is an example of 18th-century residential architecture in the US.

Machado Silvetti was selected to design the preservation project by the Menokin Foundation, which was established in 1995 to protect the remains of Lee's house. Called The Glass House Project, the design will use a gridwork of glass and steel to rebuild portions of the home's missing gabled roof, walls and floors.

The glazed addition will be on the front right corner of the 18th-century home, allowing for views from the outside in, and expansive views of the surrounding countryside while indoors.

The house sits on 500 acres (202 hectares) on the outskirts of Warsaw in northeast Virginia near the Chesapeake Bay, and was once a tobacco plantation. 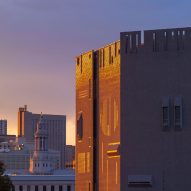 "The remains of the Menokin Plantation challenged our imagination to develop a design that, while preserving and restoring what exists, would provide the visitor with an innovative, distinctive experience," said Jorge Silvetti, co-founding principal of Machado Silvetti.

"Without resorting to reconstruction or re-enactments of past actions, the work we developed together with the Menokin Foundation and the extraordinary professional team of consultants, advisors, and supporters, will engage the visitor in an immersive experience provoking not only their curiosity but their active imagination," Silvetti added.

Remaining portions of the home will be also preserved, and new steps and railings will be added on top of the original stairs outside.

Machado Silvetti's glass construction will enclose portions of the home that have fallen into disrepair and left exposed to the elements. Portions of the interiors will be rebuilt and feature white walls and minimal detailing.

"It will allow visitors to fully understand the original house, re-establish its overall configuration, its footprint and its functions, and from both the outside and the comfort of the inside, highlight its relationships to the natural environment," said the studio.

"At the same time, it will reveal, at close range, what is usually not seen: the work of restoration and conservation, the materials used and the methods and craftsmanship involved in local construction."

Construction has begun, and the project is expected to complete in 2023.

Machado Silvetti was founded by Silvetti and Rodolfo Machado in 1985, and has offices in Boston, Massachusetts and Buenos Aires, Argentina. The practice has also designed an extension for a museum with green tiles in Sarasota, Florida and the renovation of the Denver Art Museum by Gio Ponti.

Images are by Machado Silvetti.