In the final part of Virtual Design Festival's day of talks with What Design Can Do, curator Jimena Acosta and artist Larissa Ribeiro discussed gender equality in design

Acosta and Ribeiro spoke to Dutch curator Saskia van Stein about how design can help combat gender oppression in Latin America and beyond, as well as how creatives can work together to build a safe and equitable society for women and girls.

The conversation forms part of Virtual Design Festival's collaboration with Amsterdam-based design platform What Design Can Do, which features three live talks focusing on social justice in design. 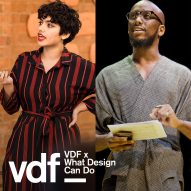 Ribeiro is a graphic artist and teacher from São Paulo, Brazil. She is a co-founder of the feminist magazine Revista AzMina and Mulheres Ilustradoras, an open directory of female illustrators in Brazil.

She runs São Paulo-based design studio Estúdio Rebimboca, and is a co-author of children's book President of the Jungle.

Acosta is a Mexican curator focussed on the way in which design can shape culture, politics and societal thinking. She is guest curator at the 2020 edition of Mexican design festival Abierto Mexicano de Diseño, which is set to take place in October.

Her exhibition I Will What I Want: Women, Design, and Empowerment was exhibited at MUCA Roma in Mexico City and Parsons School of Design in New York, and explored the role that design has played in forming understandings of gender in the latter half of the 20th century.

Saskia van Stein is a curator based in the Netherlands. Last year, she was appointed as headmaster of The Critical Inquiry Lab masters programme at Design Academy Eindhoven. She has previously worked as director of Bureau Europa, a platform for architecture and design in Maastricht, and as curator at the Netherlands Architecture Institute in Rotterdam.

About What Design Can Do

What Design Can Do believes that design and creativity can transform society. Its annual conferences in Amsterdam, Mexico City and Sāo Paulo are attended by designers and creatives, as well as businesses, NGO's and governments.