Vitra is showcasing four of its latest products at VDF products fair, including designs by Jasper Morrison, Konstantin Grcic and the Bouroullec brothers.

In addition, the Swiss furniture brand has reissued the Chaise Tout Bois chair, which was designed by French architect Jean Prouvé in 1941 and is made entirely from wood.

The products, including a lounge chair and ceramic vases, are now live at the VDF products fair platform that offers designers and brands an affordable way to launch new products.

Vitra's seating collection Citizen was developed with Grcic to challenge the aesthetic of traditional lounge chairs, which the brand says often rely on "voluptuous upholstery".

It prioritises comfort and is characterised by a tubular steel structure, a suspended seat that gently swings in all directions and a contoured backrest that envelops the upper body of the sitter.

Alongside the reissued Chaise Tout Bois by Prouvé, the other chair on the show is Moca, which Vitra designed in collaboration with British designer Morrison.

Moca is intended as an "understated addition to any setting" and has a deliberately simple, stackable form that references traditional tubular steel chairs.

The final collection on show at the fair is Vases Découpage – a series of ceramic vases and abstract shapes Vitra has developed with the Bouroullec brothers.

Vases Découpage is available in three styles, named Barre, Disque and Feuille, which are intended to be mix-and-matched by users to create playful compositions. 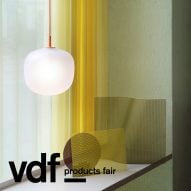 Muuto is another brand at the VDF products fair presenting products that it has developed in collaboration with different designers, such as  TAF, Cecilie Manz and Anderssen & Voll.