Japanese architecture studio Swing has built a compact, shared house for eight people in the city of Osaka, Japan.

The two-storey co-living home is arranged around a communal living and dining space on the ground floor, which is overlooked by a mezzanine space described by the architects as a library.

Swing aimed to make create a variety of spaces within the limited space of the 140-square-metre building so that its residents could feel at home.

"To secure the maximum space under the limited condition, which was a two-story building on a compact site, so that eight people can live together with being as relaxed as they can, and to provide various places where each of the residents can feel they belong."

To encourage the creation of a community within the home Swing created visual connections between the spaces and placed the door so that it directly opens in the living room.

The studio also aimed to create spaces that are not usually possible in apartment blocks, like the high-ceilinged main living room and mezzanine.

"On the first floor, the living and kitchen area is directly connected with the entrance, which organically creates communications among the residents," Anezaki told Dezeen.

"Also, another living room on the mezzanine, which is about two meters above, is vertically spatially connected by the open-space stairs. We designed it to show the various sceneries of the life of the residents, being relaxed, moving around, going out or eating, in one space."

In total the house has eight single bedrooms, three on the ground floor and five on the first floor. The building is topped with a roof garden – another communal space for the residents. 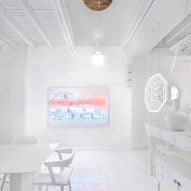 Swing designed the house for single people living in the city who do not want to live alone.

"Single office workers up to 40 years old will live here," said Anezaki. "We envisaged those who are active and like to go out. Students and people from foreign countries are also possible residents."

Swing believes that co-living spaces can offer a positive alternative to living alone and can have a positive impact on the young people who reside in them.

"There are lots of benefits of co-living that cannot be experienced by living alone in a city. They can feel family-like warmth through their daily life, share cultures and experiences of various countries, and help each other when in trouble, " said Anezaki

"We're sure about those benefits as they are shown from the result of questionnaires to the residents. In addition, we believe it gives positive effects on young people developing personalities through co-living including cross-cultural exchanges."

Other recently completed co-living spaces include a completely white co-living space, which occupies a traditional shophouse in Singapore, and a sloping block of co-living apartments with a tree-filled atrium in Seoul.

Photography is by Eiji Tomita.