The architecture studio designed the shelter to cover 300 concrete seats alongside a stadium used by football team FCD Transvector in a village near Vicenza in the north of Italy.

Its design is a simple response to the brief of providing shelter for fans with unobscured views of the pitch.

"The idea was to create a sheltered area as free as possible from elements that could stop the view of the field so to guarantee the entire action of the game to the viewers," said Didonè Comacchio Architects co-founder Paolo Didonè.

"The design of the shelter was the natural evolution of the concept," he told Dezeen.

According to the studio, the form of the shelter was directly informed by the work of 20th century modernist architect Mies van der Rohe and in particular his design for the Neue National Gallery in Berlin.

"We are always inspired by the simplicity and rigorousness of Mies's architecture, especially the National Gallery which is, to us, a classic design," said Didonè. 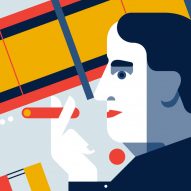 While at the gallery this is supported by a grid of slender steel columns, the football stand roof is placed on two rectangular concrete piers placed at right angles to each other.

"The shelter is based on a cantilevered structure which is a typical element for football stadiums," explained Didonè.

"Our main objective was to create a structure that could answer to the initial brief – covered area, good view of the field – in the best way possible."

The rectangular, 30.5 metres long and 10.5 metres wide, roof structure is a made from a grid of steel beams that form a coffered ceiling.

Lighting is contained between the beams and covered by a dark metal grid .

Didonè Comacchio Architects is an Italian architecture studio founded by Didonè and Devvy Comacchio in 2013.

German-American architect Van der Rode was one of the most influential architects of the 20th century and was also the third and final Bauhaus director. He coined numerous phrases, including "less is more" and "God is in the details", and designed the iconic Barcelona Pavilion.