Chiave and Van Bleijswijk spoke to Dezeen's founder and editor in chief Marcus Fairs about the Tinkering and Hubble Bubble lighting fixtures which were both launched on the Virtual Design Festival site earlier today.

Chiave, who works at Moooi founder Wanders' eponymous product and interior design studio, introduced Hubble Bubble, a light formed of a series of hand-blown glass spheres of different sizes suspended in a halo around a circular metal frame.

The light was designed to evoke childhood memories of blowing soap bubbles, apparent in the iridescent, oil-like finish that coats the glass bulbs. The lights can also be ordered in a more subtle frosted glass. 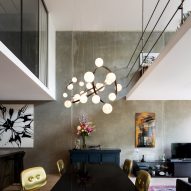 Van Bleijswijk presented Tinkering, a pendant light for Moooi based around a hanging network of black metal rods.

Light sources with arched shades that resemble security cameras are fixed to this metal base, forming a lean frame that can be suspended from the ceiling above long tables or counters.

Both Hubble Bubble and Tinkering are engineered using a technology called Electrosandwich, which was originally developed by Wanders for Moooi.

The technology eliminates the need for individual wires running to each LED by embedding conductive material within the body of a lighting fixture, allowing for as sleek an appearance as possible.

Chiave joined Amsterdam-based studio Marcel Wanders as creative director in 2007. Alongside Wanders, he oversees the prolific studio’s output for brands that include Alessi, KLM and Puma.

Van Bleijswijk is one half of Eindhoven-based duo Kiki and Joost along with creative collaborator and partner Kiki van Eijk, who he met at Design Academy Eindhoven.

Pieces designed by Van Bleijswijk often reveal the story of their design and construction in their final form, as with the Physical furniture collection presented by Kiki and Joost at Milan design week in 2016, which resembled rough line drawings, or a collection of furniture assembled from found objects and machine parts exhibited at Dutch Design Week in 2014. 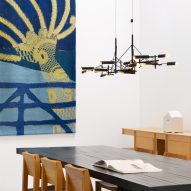 Van Bleijswijk previously worked with Moooi to design the Construction Lamp, which features a pylon-like stand that appears as though assembled using a child's construction toy.

The talk is the first live instalment in Dezeen's long-running Design Dreams video series for Dutch furniture brand Moooi, in which designers explain how the brand has helped them to realise fantastical concepts without compromising on the design, often overcoming significant engineering challenges in the process.