Hungarian design brand Sekhina has made a series of light switches and plug sockets from concrete as an aesthetically pleasing alternative to plastic.

Billed as the first of their kind, Sekhina founder Gábor Kasza made the concrete covers for switches and sockets after not being able to find any similar products made from the material.

"Concrete switches and sockets had to exist already – or so we thought initially; it seemed such an obvious idea, but we couldn't find them anywhere," said Kasza.

"We thought they would look and feel fantastic, so we created them," he added. "You can now find the very first completely concrete cover of switches and sockets, made from only silicates – more sustainable and more beautiful."

Initially drawn to the "fair-faced" complexion of concrete surfaces and objects, Kasza began developing the covers as part of his exploration of the material. He wanted to try to find a way to make light switches and sockets something that people don't want to conceal.

"A piece of plastic on the wall can be bizarre, sometimes quite terrible," he explained. "Interior designers very often try to hide switches and sockets as they blunt the general aesthetics of their work, but they're functional useful objects."

"If we have to search for a long time to find them and posture freaky poses to use them – that's not too comfortable. The answer is concrete."

According to the designer, concrete is an appropriate material for switches and sockets due to its electrical insulating and non-flammable properties. Each piece has a unique design, featuring various bubbles and marks on its surface as a result of the moulding process. 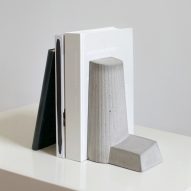 The designs are currently prototypes and Kasza hopes he can get backing from investors to eventually mass-produce them.

Alongside the concrete switches, the designer has also created a series of polished terrazzo-style surfaces in various shades including pale pink, green and blue.

Designed to be as environmentally friendly as possible, the formula concrete switches and sockets are made from 25 per cent cement and are free from synthetic resins and contaminants.

"We know that the plastic materials of switches and sockets make up a very low percentage of global plastic pollution, but we think that all of the tiny steps to create a more sustainable future are remarkable," said the designer.

"We are very proud that we can offer a better alternative, although we know that concrete can harm the environment as well," he continued. "We do not use artificial resin nor pollutant additives – we call it a 'stone to stone' product."

To further neutralise its carbon footprint, Sekhina will be planting trees in cooperation with a chosen environmental organisation, as well as seeking advice from environment-protection specialists before starting mass-production.

According to Kasza, the objects we touch in our day-to-day lives have a physical effect on our bodies and minds. He compares the use of concrete for switches to using a glass instead of a plastic cup.

"How many times a day do you touch light switches?" he questioned.

"If you feel it is better to wear a natural silk scarf than a nylon one and you can feel the difference between the perfume of flowers compared to a cheap toilet fragrance, then surely you will appreciate our products."

Concrete has been used to make other household objects such as bookends and doorstops, created by London designer Liliana Ovalle, as well as a collection of bathroom furniture by Marco Merendi and Diego Vencato.

New York-based Bower Studios also experimented with concrete to create a chair-top that is designed to look like it is melting over a metallic base, forming folds on the floor.