Mexican studio BAAQ has arranged the Casa Naila holiday home on the coast of Oaxaca into four blocks around a cross-shaped patio so that all rooms have views of the sea in more than one direction.

Casa Naila, which is named after a traditional song from the region of Oaxaca, is located in the village of Puertecito on a small peninsular that juts out from the Mexican coast into the Pacific Ocean giving the holiday home multiple sea views.

This location was the driver for both the house's form and the materials that it was made from.

"Through architecture, we wanted to allow the inhabitant to experience this powerful and unique beach on the pacific coast, using natural elements as tools to make the house equally powerful but simple and elegant," explained BAAQ co-founder Alfonso Quiñones.

"Named after a traditional song, Casa Naila honours Oaxaca, exploring new possibilities of how to inhabit the beach respecting the natural and social order of it, using materials from Oaxaca's rural architecture," he told Dezeen.

BAAQ broke the house up into four volumes that surround a cross-shaped central patio, which was designed to be used as an outdoor room.

The outdoor area contains a series of terraces and gardens as well as a swimming pool.

"Since we had two oceanfront views, a cross-shaped patio was a scheme that worked really efficiently, and it was in accordance to make the space visually more accessible," explained Quiñones. "Also, it helped to allocate most of the social activities in the open space mostly," he continued.

"The angle and separation of the volumes allow for ocean views from any room and, while simple, the scheme achieves a formal integration between rock and beach landscape."

On the ground floor, the two of the volumes that are directly alongside the beach contain a kitchen and dining room, divided by an outdoor terrace. A studio and the master bedroom are on the lower floor of the other two blocks.

All the blocks apart from the dining room have an upper floor, which combined contain a further four bedrooms.

The entire holiday home was built on a concrete plinth, with exposed concrete used to build the block's structural walls. This was combined with a wooden structure that was covered in panels made from palm trees.

The permeable palm panels mean that the rooms can have natural light and be cross-ventilated, without the need for glazed windows. 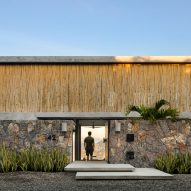 "Its usage brings transparency, permeability allowing cross ventilation and views to the outside without the need for windows. The floors made with clay and earth, provide thermal comfort for guests, and give interior spaces a natural look and freshness."

Casa Naila was not separated from the beach by any perimeter fencing and the courtyard space opens directly onto the beach so that the home does not feel isolated from the community.

"The detached house sits on a popular beach where local families like to spend the day and so it was important to make it feel part of the site," said Quiñones.

"The strategy has resulted positively in both allowing the inhabitants direct contact with the beach, while visitors from the beach are welcomed to use the pool or terrace, something that happens periodically to the satisfaction of the owners."

Quiñones believes that the holiday home has achieved its aim of uniting its owners with the beachside site.

"In the end, the result is a space that accomplishes one of the noblest purposes of architecture: to experience a bond between the inhabitant and the site, about which we feel very satisfied."

Other recently completed Mexican holiday homes include a house designed by Zozaya Arquitectos in the beach town Zihuatanejo that steps down a steep slope towards the Pacific Ocean and a residence in the surfing village of Sayulita that is nestled among trees, plantains and ferns and also overlooks the Pacific Ocean.