Peter Morris Architects has revealed the design for a pair of houses in north London, which will have a facade made up of pink arches "absolutely everywhere".

Cloud House, which is actually a pair of three-storey homes united behind a pink-arch-covered facade, is set to be built in Gospel Oak after winning planning permission earlier this month.

Peter Morris Architects designed the pair of houses, one of which will be its founder Peter Morris' own home, to bring an element of fun to the street it will be located on.

"The goal was to create a building that would bring joy and delight to the neighbourhood," Morris told Dezeen.

"Something that would feel like a surprising treat for anyone who came upon it, as well as to create a beautiful home for my family to live in, alongside one for someone else to buy."

The home will be built between a heritage-listed school and a modern, brick home on a street that has buildings in a variety of architecture styles.

It was the arches at St Martin's Church, which stands opposite the site and was referred to by architectural writer Nicholas Pevsner as "the craziest of London's Victorian churches", that informed the houses' many arches.

"I know it's not generally a very fashionable idea in architecture, but I love the idea that a building can be decorated on its outside as well as on its inside," said Morris.

"The arches on The Cloud House mostly aren't structural, but their decorative sculptural quality informs the whole look and feel of the building."

"Once I'd had the idea of exploring the arch shape which appears both in the interiors and exteriors of St Martin's Church opposite, it made sense to modernise and simplify that shape and then use it unapologetically, absolutely everywhere."

Morris arranged the pink arches, which will cover all four facades of the house, through a process of trial and error.

"More than three years ago, when I first began the drawings, I started to play around with the pattern of arches. I staggered them, cut them in half in places, doubled them in size in others," explained Morris.

"Some were solid, others became glazed. I added circular windows in various spots. The decision not to flatten the top of the arches was key, as that created the curves in the balustrades," he continued.

"The design happened like a game of consequences. Each decision changed the design, but at every stage, the house grew curvier and prettier and managed to reinforce the original concept, which was to create a joyful building that would surprise and delight."

Both of the houses have been designed as upside-down homes, with bedrooms on the lower floors and living spaces on the upper floors. Each house will be topped with a roof terrace and the large one will include a plunge pool.

The arched forms on the houses' facade will continue within the homes, which will include arched doorways and barrel-vaulted ceilings. 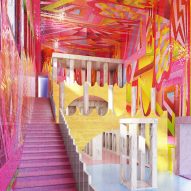 Both the exterior and interior colour scheme for the homes was drawn from the Art Deco architecture of Miami. On the facades, pale pink arches will be combined pale green metalwork.

Inside, the floors will be made from pale-blue poured resin, pink and white marquee stripes will run across the walls and ceilings and the kitchens will be emerald green with black and white terrazzo worktops.

"The buildings in the street range from red brick to yellow brick, with various buff tones in between, not least in the ragstone facade of the school next door and the church over the road," said Morris.

"It isn't a street with just one colour, so the choice of pale pink render with a yellowy hue complements the other buildings, without trying to match them," he continued.

"Once we'd chosen the pale pink tone, it felt right to pair it with pale green metalwork – they're colours that I've always loved, and they remind me of our honeymoon in Miami."

Morris believes that the colourful, fun architecture will be appropriate for a family home.

"I like fabulous spaces that are a joy to look at and a pleasure to inhabit, buildings that make you feel good and prompt a smile," he said.

"I think that spaces that make you feel a little bit like you have to be on your best behaviour can, of course, be wonderful, but this was about making a home for my family – a place for laughter and creativity and daftness. I crave more diversity in design."

The bright home is one of many colourful buildings that are being built in London as part of a trend called New London Fabulous, which was identified by designer Adam Nathaniel Furman during Virtual Design Festival.