The indoor skate park was built in the latest stage of the development of La Condition Publique – a cultural institution set within an early 20th-century warehouse, which was renovated by architect Patrick Bouchain in 2004.

Ilori used colour to transform the former exhibition hall, which is divided by concrete columns, to give the skate park a strong identity and to make it a bright, enjoyable space for skateboarding.

"The colour brings joy into the park but also gives the indoor skatepark its new identity," Ilori told Dezeen.

"Some colours and motifs were inspired by the facade of La Condition Publique because it was important for me to bring some of these integral details that add to the identity of the building inside and in the skatepark."

Within the park, Ilori combined numerous bright colours with pastel hues. The brick walls have been painted bubblegum-pink or peach with graphic red, green and orange friezes, while the columns and obstacles are sunshine-yellow, green, red, fuchsia and blue.

"The colour pallet was determined by the experience I wanted the skateboarders to feel when using the space, which was joy and excitement," Ilori explained.

Ilori worked closely with skateboarder and Decathlon skateboarding product manager Jean-Philippe Rode to create the layout of the park, which contains two corner quarter pipes with banked ends, one central hybrid module and a volcano ramp.

The design and arrangement of the obstacles, which were made using FSC certified recycled paper from Skatelite, was shared with local skateboarders to determine the final form.

"Rode shared our early concepts with some of the skateboarder community and we had regular feedback from them which was super insightful and helpful for the design development process," explained Ilori.

"Skateboarding is an art form and understanding how skateboarders move and flow between spaces and obstacles was something I had to respect."

The skate park was built by staff from La Condition Publique in the building's adjoining construction hall during May 2020, with Ilori supervising remotely due to the coronavirus lockdown. 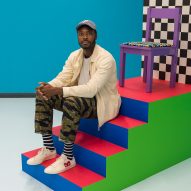 As well as staff from the cultural centre, two classes of children from the nearby Saint Rémi secondary school also collaborated in the construction and painting.

Ilori hopes that the colourful skate park will be attractive to amateurs as well as more experienced skateboarders, and help the cultural institute attract a wide range of users.

"It was important for me and La Condition Publique to design a skatepark that was inclusive and not intimidating but inviting for all ages and all levels of skateboarders," he said.

"They really wanted to celebrate one of the different ways La Condition Publique, a cultural venue, can be used to bring people together and they felt that I could create this experience."

Furniture designer Ilori has applied his signature colourful aesthetic to a range of architecture, interior and public projects.

Last year he worked with architecture studio Pricegore to create the Colour Pavilion for the London Festival of Architecture and created a geometric-print adult playground for visitors of the Cannes Lions festival, while earlier this year he used joyful hues throughout London's Mira Mikati store. 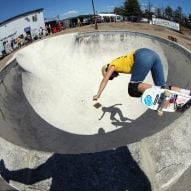 According to Ilori designing the skate park allowed him to further understand how the public utilises spaces.

"It was super fun and allowed me to collaborate and think differently about how people use public spaces. The sad news is I still can't skate but practice makes perfect!"

Photography is by Julien Pitinome.