Miró started to design Yarauvi, a floating city of the dead, during his graduate studies at Yale under his teacher Sorkin, who passed away from Covid-19 in March 2020.

Miró, who has since started his own practice in Texas, revisited the project in light of this loss.

"As the world grapples with the staggering death toll of Covid-19, Yarauvi is a timely reminder that death is a part of humanity that architecture should embrace rather than avoid," said Miró.

"At the same time, the message of tolerance and reconciliation that Yarauvi represents is critical as the world seeks to take action in the face of widespread, systemic injustice and inequality."

As a place where people of all backgrounds and faiths could be laid to rest, Yarauvi could bring people together in collective grief and celebration, its architect suggested.

Miró Rivera Architects designed Yarauvi as a bowl-shaped structure that would be open to the sky, floating in the middle of the Dead Sea in Jordan and supported by a raft-like armature below the water line. The salinity of the lake would aide buoyancy.

Slim white struts would support the underside, while the inside would hold concentric rings of sarcophagi, stepped like an auditorium.

Mourners would gather on the shore of the Dead Sea before a few of them would accompany the body across the water via a boat. The boat would enter through a gateway at the base of  Yarauvi, where a double helix stairway would lead up to the interment space.

Yarauvi functions as a ceremonial labyrinth, where people would carry the body in its coffin up and into the open-air dish and place it facing towards the centre, before exiting and walking back downstairs to their boat.

Importantly, anyone would be eligible for burial at Yarauvi.

"There are few things more universal than death; it affects every human being on earth regardless of race, creed, gender, identity, or status," said Miró.

"Yarauvi would become a growing symbol of society’s commitment to tolerance and reconciliation," he added. 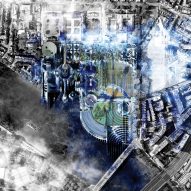 "There is no client and there is no expectation that the project will ever be built. Yarauvi is simply a result of exploring the concept of how architecture might embody ideas about death, tolerance, and reconciliation."

Other architectural projects that reconsider death include Common Accounts' prototype for an eco-friendly funeral that includes a digital afterlife and a proposal by Olson Kundig Architects for a human composting facility.