Japanese artist Yuko Nishikawa suspends perforated, papier-mache-style lamps from the ceiling to create dream-like compositions in her You See a Sheep project.

The pastel-hued lighting collection, called You See a Sheep, comprises a series of amorphous pendant lights and vases inspired by phantasmagorical concepts.

Each lamp houses a light source inside its hand-crafted ceramic shell, which is suspended from the ceiling by a thin metal wire.

As the Brooklyn-based designer explained, the collection takes inspiration from two books: The Little Prince by Antoine de Saint-Exupéry and Model T Frankenstein by Hideo Furukawa.

In the first story, the prince asks the narrator to draw him a sheep. Unable to do so, the narrator instead presents him with a drawing of a box, claiming that the sheep he asked for is inside.

The opening line of the second story by Furukawa is "You see a goat", suggesting that it is only in our perception that the goat exists.

"Floating objects surround you. You wonder if you too are floating in space, or perhaps in water," said the designer. "Gravity, the horizon, and the edges of the room disappear. You are happy."

Nishikawa makes each lamp by mixing paper fibre with wet clay and turning them into bulbous, hollow shells using a coiling technique, chosen to highlight the uneven surface and irregular shape of each design.

This method sees the artist form the clay into long rolls before building them up by placing them on top of each other to create the desired shape.

Once the clay is dry, Nishikawa cuts out the holes before applying coloured clay to the surface and firing the objects in an electric kiln.

The paper-like exterior of the lamps, paired with their rosy-hued coatings, grants them a "mysterious" yet warm glow when illuminated.

First created in 2018, the You See a Sheep lighting and vase collection is being displayed at the Galerie JAG in Paris from 21 September until 21 November 2020 at the artist's first exhibition in the city.

The main installation is a chandelier made up of 24 ceramic shells that are placed in unique formations specific to the layout and volume of the exhibition site in which they are shown.

The composition pictured was made for the group exhibition titled In Good Company, which was held in Fernando Mastrangelo Studio in New York in September 2018.

"I saw this exhibition as a celebration of art and design and an opportunity to build a supportive community of the designers and the users," said Nishikawa.

"So I designed this chandelier with some shells hanging low to the ground, others floating high, altogether creating a conical volume," she continued. "It becomes an environment where people can walk through and physically engage with the installation." 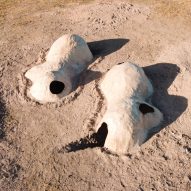 Studio I/thee applied similar-looking papier-mache forms to an architectural project, which saw the design firm cast nearly 300 pounds of paper in large holes in the ground before flipping them over to create dome-like structures.

According to the designers, the houses are unofficially one of the world's largest, self-supporting, papier-mache structures.

Photography is by Cary Whittier.