Nearly 300 pounds of paper was cast in large holes in the ground before being flipped over to create the Agg Hab prototype home on a Texas ranch, which the designers claim is one of the "world's largest, self-supporting, papier-mache structures."

Large holes were burrowed nearly two metres deep into the ground to form casts for the papier-mache domes, which are made out of nearly 270 pounds worth of recycled paper and 200 litres of non-toxic glues.

The team said the protoype is an example of an eco-dwelling due to the materials used.

"Most of the project was made out of recycled papers, and the adhesives were all handmade by our team on-site using no animal products or toxins," I/thee co-founder Neal Lucas Hitch told Dezeen.

Once set, the paper shells are four millimeters thick, 20 feet long (six metres long) and eight feet (2.4 metres) wide. They are then flipped over to rest on top of the excavations to create enclosures that are nearly three metres tall.

"Together, the holes, matched with their respective shells, create a semi-subterranean house in which the negative and positive expressions of a series of excavated forms take on a reciprocal relationship to create multiple habitable spaces," the team added.

"The house stands unofficially as one the world's largest, self-supporting, papier-mache structures."

Agg Hab features a series of openings in the paper structures that form apertures to let in natural light and doorways to enter inside.

A slope is carved into the earth to create a ramp that leads inside the semi-subterranean structure.

"As light filters in through the openings, it reflects off the glossy paper, producing an almost ecclesiastical, yet somehow sublunary, environment," said the team. 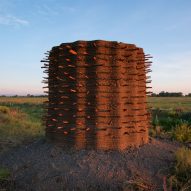 "As people move into the spaces, they become enveloped in a primordial experience – as if gestating in the womb of mother earth or stowing away in the belly of a whale just below the surface of the ocean."

Agg Hab was created as part of this year's Oakes Creek Residency, which is held annually on a Texas ranch owned by cowboy-artist, John Robert Craft.

It is among a number of projects experimenting with building materials. Others include 3D-printed earth structures that Rael San Fratello created to demonstrate potential of mud architecture and Stephanie Chaltiel's emergency house prototype that is built with mud-spraying drones.

Photography is by Neal Lucas Hitch and Sarah Aziz .