Planks of wood reclaimed from an old barn were used to clad this house in Hampshire, England, designed by Pad Studio.

Fittingly called The Barn after its shape and cladding material, the house sits on an exposed site near a coastal path next to another home.

Pad Studio chose the recycled wood with its natural patination for the walls, roof and decking to help the house blend with the landscape.

At both gable ends the boards of Douglas fir are arranged as fins with the waney-edge – a traditional timber cut that leaves the bark on – orientated outwards to create a "blurring" effect.

"The proportions, materiality and fenestration of local farm buildings were carefully studied and reflected in the design to create a contemporary yet sympathetic scheme," said Pad Studio.

"This ensured The Barn sits comfortably in the local surroundings without becoming pastiche."

The buff-coloured brick plinth that the house rests on is made from the same pale local clay as many houses in the area, including the Barn's neighbouring dwelling.

A cutout in the cladding around the entrance reveals the same bricks, which were also used to build the chimney stack.

For the interiors, Pad Studio used a palette of muted and natural tones. Frameless picture windows are orientated to make the most of the views out over the landscape.

Most of the ground floor is given over to an open plan living area with a high ceiling that follows the line of the gabled roof and glazed doors that open onto the decked terrace.

The kitchen area features a bespoke element made with input from the occupants, explained Pad Studio.

"The concrete splashback in the kitchen has been customised by the family to act as a mini time capsule," it said.

"Coins, shells and even an iPhone are embedded into its surface, adding a totally unique and personal touch in this space."

There are two bedrooms and a pair of bathrooms downstairs. Upstairs, a mezzanine level has a bedroom that has spaces for up to six people to sleep, along with its own shower room. 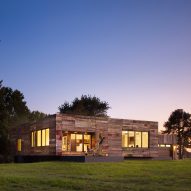 "The loft is accessed by an unconventional Paddle staircase with a fireman's pole installed to offer an alternative, fun route down to the main living space," said Pad Studio.

In the garden, silver birch trees are planted amongst beds of wildflowers.

Pad Studio was founded in 2013 by Wendy Perring and is based in Hampshire. The practice recently created a prefabricated cabin for a protected area in the New Forest.