A glass and steel dome modelled on the shape of a turtle shell rises from the top of a historic building in New York City's Union Square to pay homage to an indigenous group that settled in the area.

Tammany Hall is a brick building situated at the east corner of Union Square Park built in 1928.

It is the former headquarters of the Tammany Society, a political organisation named after chief Tamanend, who was the leader of an indigenous group called the Lenape people that settled on land along the East Coast, including present day New York City.

BKSK Architects consulted with the Lenape Center, an institution led by Lenape elders that upholds the legacy of the group through programming and exhibitions, to realise the project.

It involved a restoring the landmark building's facade and an expansion of its usable space, which was created by the three-storey-high glass dome on top of the structure.

The rounded roof takes cues from the shape of a turtle shell, a reference to the origin story of the Lenape, which says the group believes it rose from the water on the back of a turtle.

"Using symbolism from the Lenape creation story, a glass dome inspired by the form of a rising turtle shell has been added to the building bringing an additional 30,000 square feet (2,787 square metres) to the interior," the studio said. 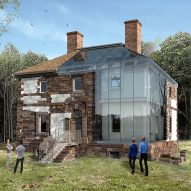 To form the circular dome the existing hipped roof was reconstructed using steel and glass panels that are covered with grey terracotta sunshades.

On the top floor sunlight beaming through the domed roof projects the geometric pattern of the steelwork across the floor and rounded walls.

To protect the building from solar heat gain and unwanted glare the studio chose a transparent glass material that also provides clear views of the nearby Union Square Park.

In addition to the new roof, the brick and limestone facade was also carefully restored and new bronze storefronts, similar to the structure's original design, run along the street level.

"We believe that many structures, Tammany Hall among them, can accommodate change and vertical expansion without a loss of integrity."

BKSK, Edifice Real Estate Partners and owner Reading International have positioned the building to house several retail or commercial leases or to act as a single flagship location for a business.

Other historic preservation projects in the United States include an 18th-century home in Virginia with a glazed addition designed by Machado Silvetti and Boston's brutalist city hall.

Photography is by Christopher Payne | ESTO, courtesy of BKSK Architects.