Arnhem in the Netherlands has made a 10-year plan to re-landscape the city to cope with extreme flooding and heatwaves caused by climate change.

Flooding, heatwaves and droughts are already affecting the city, prompting the council to set a goal of reducing the amount of asphalt – a dark material used for roads and sidewalks that absorbs heat and increases water runoff – by 10 per cent for 2030.

Selected roads will be replaced by grass, and trees will be planted to provide shade for other routes, cooling parts of the city.

Switching asphalt for greenery will also help with flooding, and Arnhem aims for 90 per cent of all rainfall to be diverted from its sewer system.

Residents and entrepreneurs with an idea on how to make the city more resilient against heatwaves, flooding and droughts can apply for a subsidy through an initiative called Initiatives Climate Adaptation. This scheme has €450,000 (£402,000) to give over the next three years.

The city, which sits 13 metres above sea level, has experienced serious flooding in recent years, while droughts have dried up its parks and gardens.

"Many of us will still be the ones to remember the downpour of 28 July, 2014. Then it rained so much that large parts of Arnhem literally in a short time were underwater," said a report on the city's climate adaption strategy.

"The rubber boats passing through the streets are still clear in our minds."

Temperatures reached almost 40 degrees Celsius in the summer of 2019, putting the elderly and vulnerable at risk, and 2020 was Arnhem's third dry spring in a row.

In 2019 Arnhem city council ran "downpour simulations" on a test street paved with different materials, where residents could watch how they coped in heavy rain and select the paving they wanted for their streets.

"Arnhem is at the forefront when it comes to climate adaptation," said city alderman Cathelijne Bouwkamp. 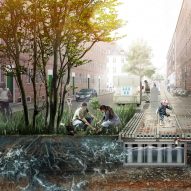 The city council will partner with the water board, local corporations and schools to focus on the climate adaption strategy.

"By joining forces, we ensure that Arnhem is as well as possible prepared in the future against increasingly extreme weather," added Bouwkamp.

Cities around the world are rushing to adapt to climate change and the serious weather it causes. In San Francisco, a historic building has been raised three metres off the ground to save it from rising sea levels, and in New Orleans, nuns have donated their convent to be turned into a wetland for flood prevention.

Main image is a stock photo from Pixabay.