A team of design graduates have developed a wearable device that is hidden in the mouth as a "surveillance-proof" authentication method that could replace fingerprints and facial recognition.

Sharing a visual likeness to dental wire retainers, the Stealth device would be worn on the roof of the mouth and work similarly to fingerprint recognition, identifying the individual via the unique patterns of their rugae – the ridges or folds of skin located on the mouth's palate.

Design graduates Beren Kayali, Lu Ye, Paul Mendieta and Lea Marolt Sonnenschein from the Royal College of Art and Imperial College London developed the device to make it harder for hackers to replicate "out-in-the-open" biometric data like fingerprints or voices, as well as "outdated" and vulnerable systems like manual passwords.

After the user has inserted the Stealth device into their mouth, it would scan their pre-stored palate biometrics to check that it belongs to them.

Then, in order to unlock particular devices, a "one-time sense code" would be sent to the user – a process that requires internet signal or wifi – and they must perform a certain pre-defined, intentional sensory gesture with the tongue in response to the code, like pressing or sliding.

"Within an authentication system, the human element is one of the weakest links," said the designers. "The current authentication methods and interfaces for access control are not resilient enough in the era of surveillance."

"Passwords are vulnerable to data breaches and shoulder-surfing by people or camera surveillance. They are also hard to manage, leading to significant numbers of compromises by careless insiders." 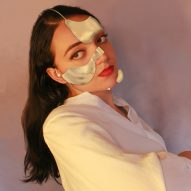 "That's why more and more companies are moving towards biometrics," they continued. "However, people leave traces of biometrics easily and unconsciously everywhere, which makes them less reliable if they are targeted and forged."

According to the designers, fingerprint scanners could be fooled 80 per cent of the time with technology that costs just $2,000 (£1,523).

"Once biometrics are forged or hacked, we can do nothing to change them," they added. "If you think changing your password is difficult, try changing your fingerprint."

According to the graduates, the mouth has multiple biometrics that are, naturally, hidden and cannot be easily collected by other people. This includes tongue print, teeth, palate rugae and saliva.

They selected the rugae, located on the mouth's palate, as the identifier as not only are they unique to each individual, but they are less likely to repeat across generations within the family than fingerprints.

For the designers, the most exciting element of the Stealth device, however, is its potential to combine different methods of in-mouth data collection – such as biometrics, temperature, humidity and pressure – and applying this to an artificial-intelligence-based algorithm.

When connected to devices like smartphones, the Stealth gadget could also deliver digitally simulated tastes to the mouth to communicate incoming calls or messages.

A sweet taste might be used to represent a family member, for instance, and the wearer might tap their tongue on a certain spot three times to signify that they will call back soon if they are unable to pick up – similar to the automated reply on iPhones and iWatches.

"It could be the most symbiotic and robust identification system of our generation," they said. "The overarching vision of this project is a future in which we can create a second skin inside the mouth to be used as an interface."

They are also researching the use of saliva as a biomarker – an indicator of any diseases present in the individual.

"The data from your saliva is a mirror of your physical and mental health," the graduates explained. "Both the data of the instant and overtime is valuable."

"While it​'s optimistic that saliva sensors will be ready within years, we believe there has to be the right medium to make them live inside people's mouths."

The team have registered their first patent for the design, and are actively working on developing a prototype. 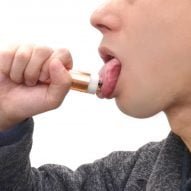 Like the Stealth designers, the creators of the synthesiser believe that the device opens up new possibilities for human-computer interaction, and could provide an entirely new medium for multimedia experiences.