Glasgow School of Art graduate Erlend Prendergast has designed a modular robotic device that talks back to Amazon's virtual assistant Alexa in order to protect users from digital surveillance.

Prendergast developed the CounterBug project during his final year of study on the Scottish school's Product Design course.

The self-initiated project explores some of the widespread fears and paranoias that exist around domestic spying and digital surveillance.

In particular, he found that the notion of "big brother" surveillance and the modern phenomenon of monitoring people's habits, concerns and preferences in order to assist customised marketing strategies have created a deep distrust in many devices.

The designer examined rituals and behaviours such as covering a laptop's camera with a sticker, before choosing to focus his speculative design proposals on how users interact with Amazon's voice-operated device.

CounterBug responds directly to some of the privacy issues raised by users. It performs tasks that are targeted at disrupting Alexa's ability to gather different types of personal data. 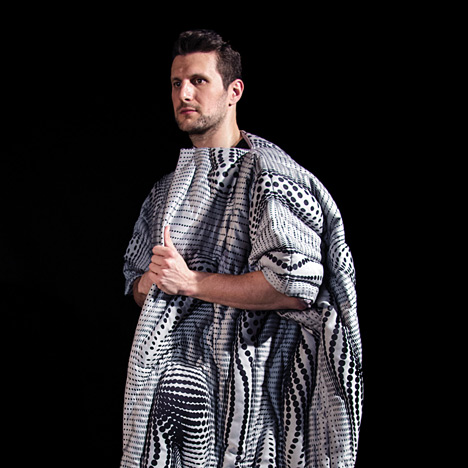 Speaking to Dezeen at the Glasgow School of Art degree show, Prendergast described his proposal as "an alternative approach to digital self defence" that is intentionally "satirical and tongue-in-cheek".

"There is an inherent irony at the core of the project," he added, "because really the only way to defend yourself against Alexa is to not buy an Alexa."

The design of the modular device is derived from the shape of Echo – the smart speakers that connect to the Alexa virtual assistant – but has been iteratively altered to create a form that is more friendly and personable than Amazon's inconspicuous product.

"I felt that it was important for the form to completely oppose the Amazon Echo's seamless, minimal aesthetic," suggested CounterBug's creator. "I began by altering the form of the Echo, a little bit at a time, until it had grown a completely new character."

Prendergast designed three different attachments that perform specific tasks when fitted to the three-legged base unit.

Murmur attempts to confuse Amazon's algorithms for tailored advertising by whispering contradictory phrases when the user mentions something that could indicate a preference, taste or hobby.

As an example, the designer suggested that if the user was discussing a book about the suffragette Pankhurst sisters, CounterBug might whisper something to Alexa about a Kim Kardashian book launch.

Blabber is designed to help people who feel embarrassed by the thought of someone eavesdropping on their daily life, and seeks to create a perfect digital persona for the user.

The device is switched on when the user leaves the house and autonomously converses with Alexa about socially desirable topics such as ethical retail, literature and supporting charities.

The final attachment called Scramble is intended to prevent Alexa overhearing trigger words that are monitored by the NSA, the National Security Agency in America. If the user mentions words such as "pirate", "white noise" or "car bomb", Scramble attempts to shout over it.

Other examples of designs that confront the issue of digital surveillance include a scent diffuser that alerts internet users of data leaks from their smartphones, and a quilted cloak designed to protect the wearer from unwanted data collection.