Dois Trópicos has a calming earthy palette featuring local materials and crafts that MNMA chose to complement the functions of the wellness hub.

"The concept of the project is a hybrid space, there is no determination or boundaries. We want a space that integrates gastronomy, the practice of yoga and botany," MNMA explained. "Where people can feel in every way the importance of spending time in the chaotic city of Sao Paulo to take care of themselves, slowly and with pleasure."

"A commercial space that creates a homelike hosting experience, using nostalgia and natural matter, crafted by artisan hands that desire to achieve not perfection but real environments," it added.

"By contrast, the facade is technological, drafted and executed with precision, thought to allow sun and wind in, to avoid artificial air conditioning systems," the studio explained.

"The general purpose is to create a contemporary element that, when opened, would bring back some lost time of ancient forms of construction, a slow passing of time, an earthy place... it feels like 'home'." the studio continued.

Slender terracotta-coloured bricks made by local craftsmen cover the flooring and form structures for washbasins, while textured soil-based render is applied by hand to the walls throughout.

"We don't use conventional paint to colour the walls, we literally use earth (like clay) to give this colour, the walls and ceilings are natural earth colours, we don't use anything chemical," MNMA said. 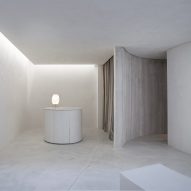 "The soil reacts allegorically to the sunlight movement along the day, turning walls, ceilings and the floor not into limits or boundaries, but into canvases for the light to express itself gradually in various forms," it added. "As it is possible to enjoy comfortably great and authentic food, full of flavours."

A spiral staircase at the entrance has a rendered banister and concrete treads with a marked underside that was built using leftover wood on the construction site. It leads up to an open studio space for yoga and massages.

"The shape was made with materials reused from demolition," it explained. "The experience was more important than the performance of the technique, so the drawings that are usually super strict gave voice to the empiricism of the local artisans workers," the studio added.

A circular door punctured in the rear wall to provides access to stairs that lead down to a restaurant on the lower level. Granite gravel is laid the floor of the outdoor areas to allow for drainage of water. A glazed roof partially covers the restaurant and bar – which is also made from the pale bricks.

Founded by André Pepato and Mariana Schmidt, MNMA has used a similarly pared-back aesthetic for a number of spaces in São Paulo. They include a retail space for Brazilian women's clothing store Egrey and a store for shoe company Selo.

Photography is by Andre Klotz.