HBG Architects has converted an old granite community oven in east Portugal into a small holiday home, featuring a staircase with steps that double as a table, bench and fireplace.

The small building, now named Rural House in Portugal, is located in the village of Aldeia de João Pires and has been owned by the client's family for a number of decades. It was formerly used as a place where locals could pay to bake their bread dough.

After remaining unused for more than half a century, HBG Architects overhauled the building to transform it into a holiday home and space for the owner's family to gather.

"Located in a small, well-preserved village in the rural centre of Portugal, the house, as many others around it, was closed and unused for more than half a century," explained Lisbon studio HBG Architects.

"The brief was to transform an ancient community oven, owned by the client’s family for decades, into a comfortable, single bedroom vacation house, with space to gather the family when needed," it added.

The changes to its exterior are only evident where the ruined porch has been restored and new red windows and wooden doors added to the facade.

Inside the granite walls are left exposed to contrast with the contemporary interiors, which are dominated by a material palette of concrete and timber – described by the studio as cosy and "loft-like".

The wooden detailing and furniture throughout are bespoke, intended to "add a sense of quality to the space" while providing multiple storage areas.

"An austere and traditional exterior materialised in rough granite blends gently with the surrounding constructions, but contrasts with a clearly contemporary interior, delicately shaped into a cosy, warm and comfortable space, with a surprising luminosity," said the studio.

At ground level, the house comprises a living and dining area, alongside a kitchen, bathroom and pantry that are tucked below a mezzanine level. 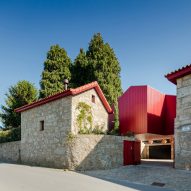 The mezzanine, which hosts a sleeping area and second bathroom, is supported by a red-steel beam and concealed behind slats of wood that extend to meet the gabled ceiling.

The focal point of Rural House in Portugal is its bespoke staircase, which has been designed by HBG Architects with a mix of wood and concrete steps that vary in size.

The concrete steps are positioned at the bottom of the staircase and two of the treads extend outwards into the ground floor space to become a dining table for the kitchen as well as a cushioned bench and fireplace for a black woodburning stove.

Finishing touches to the renovation include the introduction of skylights in the mezzanine and doorways and windows with wooden shutters and red frames.

According to HBG Architects, the windows are positioned to carefully control lighting in the dwelling and create "dramatic effects on the bush-hammered stone and on the wooden elements".

The home is complete with a restoration of the existing walled patio, which features a shed, small garden, trees and a pool.

HBG Architects is a Portuguese architecture studio founded by Henrique Barros-Gomes in Lisbon in 2010. The Rural House in Portugal is longlisted for this year's Dezeen Awards in the residential rebirth category.

Other rural houses in Portugal that involve pre-existing buildings include a stone villa by NOARQ with bright red details and the tiny Pavilion House by Andreia Garcia Architectural Affairs that is built atop an old wine cellar.