Creatives Charlotte Taylor and Nicholas Préaud took cues from the modernist architecture of Lina Bo Bardi to dream up these renderings of Casa Atibaia, an imaginary home that hides in a São Paulo forest.

In a series of ultra-realistic renderings, the pair have envisioned Casa Atibaia to be nestled amongst the forested banks of the Atibaia river in São Paulo.

This is the first collaborative project between Préaud, who is co-founder of 3D visualisation practice Ni.acki, and Taylor, who runs Maison de Sable, a studio that works with a range of visual artists to create fictional spaces.

The imaginary home was informed by Casa de Vidro, or Glass House, which Italian-born Brazilian architect Lina Bo Bardi designed in 1951 for herself and her husband, writer and curator Pietro Maria Bardi.

Comprising a concrete and glass volume supported by slim pilotis, the house is considered a significant example of Brazilian modernism – an architectural movement that both Taylor and Préaud have come to admire during their careers.

"Lina Bo Bari has been a huge inspiration for the most part of my career," Taylor told Dezeen.

"Discovering Nicholas had an equal passion and excitement towards Brazilian modernism was a perfect match, something we had to explore."

"Having lived and studied architecture in Brazil, I was overwhelmed by the presence and national pride around modernist jewels such as Casa de Vidro or Casa das Canoas by Oscar Niemeyer," continued Préaud.

"These homes have become landmarks not only for their style and modern construction methods at the time, but also because of the simplicity of the lifestyle they implemented."

However, instead of pilotis, this house would instead be elevated by huge jagged boulders that jut out from the terrain below.

Taylor and Préaud's creation would also be much more sinuous in shape, with the river-facing elevation winding inwards to form a courtyard around a cluster of existing palm trees.

This courtyard would help loosely separate the private and communal quarters of the home.

"Lina Bo Bardi's Casa de Vidro was an inspiration mostly in terms of this ethereal feeling of a delicately suspended home... gentle curves, extended raw concrete slabs and a primal relationship with the elements are our tribute to Brazilian modernism," the pair explained.

Some of the boulders propping up the home would pierce through the interior and be adapted into functional elements like bookcases, a bed headboard, or craggy plinths for displaying earth-tone vases. 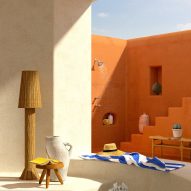 Casa Plenaire is an imaginary holiday home for lockdown escapism

In the living room, a curving cream-coloured sofa is accompanied by a couple of sloping armchairs and a floor lamp with a concertina-fold shade.

The home would otherwise be dressed with a blend of contemporary and antique decorative pieces, ideally from the likes of French designers like Charlotte Perriand and Pierre Chapo.

"It would definitely be a dream home for us in another life," added Taylor and Préaud.

"Casa Atibaia is a design experiment in which we combined both our impressions and aspirations of the ideal modernist jungle home," the pair continued.

"Through this experiment we sought to squeeze out the essence of what Brazilian modernism means to us, blurring the boundaries between inside and out while maintaining a cosy, homey feeling."

Charlotte Taylor was one of nine individuals to feature in Dezeen's roundup of 3D designers, visualisers and image-makers.

She said the recent rise of dreamy renderings coming from the likes of her and Préaud may be down to the fact that, in light of the global coronavirus lockdowns, the appetite for escapism is "at an all-time high".

Earlier this year, in response to the pandemic, Child Studio designed Casa Plenaire – a fictitious seaside villa where those stuck at home could imagine having the "perfect holiday".