A staircase punctured with rectangle-shaped holes is the focal point of this two-storey extension Grey Griffiths Architects has added to a workers' cottage in west London.

The bespoke staircase allows light to pass from the extension into the original end-of-terrace workers' cottage, which Grey Griffiths Architects have aptly named Step House.

Situated in the district of Wimbledon, the house originally had just two modest bedrooms. However its new owners – a couple with one young daughter and another on the way – were in need of additional living space.

"After undertaking some initial sketch options, we identified that by virtue of its position at the end of terrace, there was a possibility of building a larger extension that would provide a third bedroom and give the house greater longevity for the growing family," said Grey Griffiths Architects.

The rear extension, which now incorporates the home's staircase, comprises a pair of brick volumes, which have been arranged to be stepped in section so that neighbouring homes aren't overshadowed or obstructed.

This was particularly important as Step House falls under the John Innes (Merton Park) Conservation Area – a cluster of protected properties that were built by British developer John Innes towards the end of the 19th century. 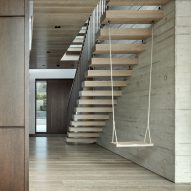 The studio also sunk the ground of the garden so that the extension could sit at a slightly lower position.

The lower level of the extension plays host to an open kitchen, complete with minimal off-white cabinetry and wooden chevron flooring.

A long bench seat that accompanies the dining table has been built into a brick "pop-out" that the studio erected on the side of the extension to mimic a brick pier on the home's rear elevation that previously stood in the same location.

A new staircase leads up to the upper level of the extension and continues to the house's original first floor.

Worried that the structure would block natural light reaching living spaces towards the front of the home, the clients initially considered having open treads – but deemed this would be too dangerous for their young children.

Grey Griffiths Architects worked alongside fabrication specialists Cake Industries to create a bespoke perforated staircase that would allow light to seep through.

Crafted entirely from birch plywood, each riser of the staircase is punctured by uniform rectangular holes. These holes also run across the balustrade.

"The clients' budget had already been stretched by increasing from a single storey to a two-storey extension, and whilst they were keen to explore a feature stair, it had to make economic sense," explained the studio.

"The stair was composed of standardised Z-shaped components of birch ply, joined by metal rods which fix to the wall."

Additional light is brought into the stairwell and the centre of the home's plan by the "glazed ribbon" the studio has created around the upper volume of the extension.

Grey Griffiths Architects was established in 2016 by Tom Grey and Michael Griffiths. The practice's Step House isn't the only London property to feature striking stairs – the staircase in Ash House by R2 Studio boasts a hole-punctured balustrade and an inset handrail.

The suspended staircase in Kenwood Lee House by architecture studio Cousins & Cousins also has a swing suspended from one of its steps.