First lady Melania Trump has been criticised on social media for her pared-back redesign of the Rose Garden at the White House, with users comparing her to French queen Marie Antoinette.

Melania Trump's design, which was created with landscape architecture firms Perry Guillot and Oehme, van Sweden & Associates, was described as "upsetting" and "an uninteresting patch of lawn".

The first lady, who is married to US president Donald Trump, redesigned the Rose Garden with a look that combines largely green shrubbery with white and pastel flowers.

Excited to honor history & celebrate the future in our beautiful @WhiteHouse Rose Garden this evening. Thank you to all who helped renew this iconic & truly gorgeous space. pic.twitter.com/ggiqLkdGbw

However, Twitter users criticised the decision to remove the cherry trees and colourful tulips from the garden, which was laid out in 1962 by former first lady Jacqueline Kennedy, who was known as Jackie O after her marriage to Aristotle Onassis in 1968.

"I normally think Melania has impeccable taste – but removing Jackie O's rose garden and all the beautiful flowers and color for whatever reason I find really upsetting not to mention not nearly as beautiful," tweeted American columnist Meghan McCain, daughter of former US senator John McCain.

"Not everything historical is meant to be redone."

"They cut down the trees? And made the whole thing look like an uninteresting patch of lawn?" added political analyst Bill Kristol.

Before and after photographs of newly renovated White House Rose Garden:
courtesy #Getty and @marycjordan pic.twitter.com/w6bzoNHMjC

Others criticised the timing of the redesign, which was unveiled during the coronavirus pandemic and will be used as the backdrop for the first lady's Republican National Convention speech on 25 August.

"If this isn't a Marie Antionette moment I don't know what is," he tweeted.

"Who cares about a redesigned rose garden when we're in the middle of a pandemic, 175,000+ people are dead and millions are out of work?"

"The plan will provide a renewal of the design first implemented by Rachel Lambert 'Bunny' Mellon during the Kennedy Administration, which has been the guiding blueprint for the Rose Garden since that installation in 1962," continued the statement. 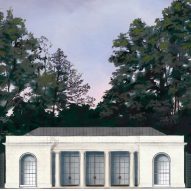 According to the first lady, some of the changes were made to increase the garden's accessibility.

"This renewal included improvements to the infrastructure and utilities, allowing this beautiful garden to more readily meet the needs of a busy White House," she said.

"These improvements also make the garden fully accessible to all Americans, including those with disabilities."

Earlier this year Melania Trump, who started an undergraduate degree in architecture at the University of Ljubljana but left the course after her first year to pursue a career as a model in Milan, revealed the design of a neoclassical tennis pavilion to be built on the White House grounds.

She has also designed a "clean-lined" logo to front her Be Best initiative.

Main image is by Daniel Schwen.