First Lady of the United States Melania Trump personally designed the "clean-lined" logo that fronts her Be Best initiative, according to news reports.

Launched yesterday, Be Best is a policy platform dedicated to promoting well-being, positivity on social media and fighting opioid abuse.

At yesterday's announcement, which took place in the White House Rose Garden, New York Times reporter Julie Davis reported on Twitter that the platform's red, white and blue logo had been designed by Trump herself.

"Melania Trump designed the 'Be Best' logo herself, an East Wing official told us," said Davis on the social media platform. "She likes clean lines, the official said, and wanted something that would appeal to children."

Melania Trump designed the “Be Best” logo herself, an East Wing official told us. She likes clean lines, the official said, & wanted something that would appeal to children pic.twitter.com/6lABdOjkHp

Trump has deciated much of her 16-month tenure as First Lady to addressing issues relating to children.

"As adults we can and should be best at educating our children about the importance of a healthy and balanced life," she told an assembled crowd at the launch yesterday.

"So today I'm very excited to announce Be Best – an awareness campaign dedicated to the most valuable and fragile among us, our children."

The logo itself is an extremely simple design with the words Be Best appearing to be written in red and blue, using a flat-tipped marker pen. 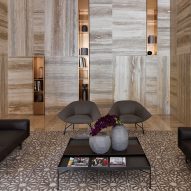 Reports have emerged that the Be Best campaign may have plagiarised a former initiative, as the accompanying pamphlet bears a strong resemblance to a document published by the Federal Trade Commission in January 2014, under the Obama administration.

Meanwhile Time highlighted that the slogan Be Best is very similar to the Be Better response that was given by Michelle Obama in answer to Oprah Winfrey’s question at the White House Summit on the United State of Women in 2016.

This is not the first time controversy has surrounded President Donald Trump's wife. Accusations of plagiarisation surrounded her 2016 speech at the Republican National Convention, and in the same year, her official website was taken down after it emerged that the claim she obtained a degree in architecture was false.