Australian studio David Boyle Architect has completed this holiday home on the country's east coast featuring a terrace elevated among fig trees, a timber breezeway, and a garden shower for washing off sand.

Breezeway House is named after the walkway that runs along its southern side, which has timber-framed folding windows that open up to allow fresh air inside. It is located in coastal suburb Macmasters Beach north of Sydney.

The breezeway starts at the entrance on the ground floor, with access to north-facing bedrooms, and has steps that lead up to the first floor containing an open-plan kitchen, living and dining room.

"It provides a dynamic, flexible space for the movement of air, people, and light," said David Boyle Architect.

David Boyle Architect created the home for a Sydney family on a site in Macmasters Beach with a series of unusual features – including angular borders, a semi-public driveway and a group of fig trees. Its response was to make the main body of the house a linear volume on the southern side, leaving space for the trees and gardens on the northern side.

The studio flipped the traditional layout by placing the bedrooms on the lower level and living spaces on top, with each having access to outdoor areas. An angular volume projects from the first floor to break the linear shape and rests on angular steelwork. This forms an elevated terrace among the tree canopy on the upper level and a cover to areas underneath.

"The building form cantilevers into the figs providing an undercroft for both play and parking and a suspended treehouse balcony supported on an expressive branch-like bent steel post structure creating a symbiotic relationship between architecture and landscape," said the studio.

A staircase leads from this veranda to a rooftop viewing platform that offers views of the beach.

Similar materials are used for the house's exterior and interior as part of the firm's ambitions to create an "ambiguity" between the indoors and outdoor. For example, blackened slats of Frencham Cypress covering the majority of the exterior and paler hardwood frames, are both continued inside.

"Surface sliding doors, and high level sliding panels contribute to a spatial ambiguity between being indoors and outdoors, which is reflected in its materiality of decking, and exposed hardwood framing and fibre cement cladding," David Boyle Architect said.

"Materials are natural, sustainable, and robust, and assembled in a way that the hand of the maker is obvious through the raw expression of the structure and the careful craftmanship of the details that can be discovered over time," it added. 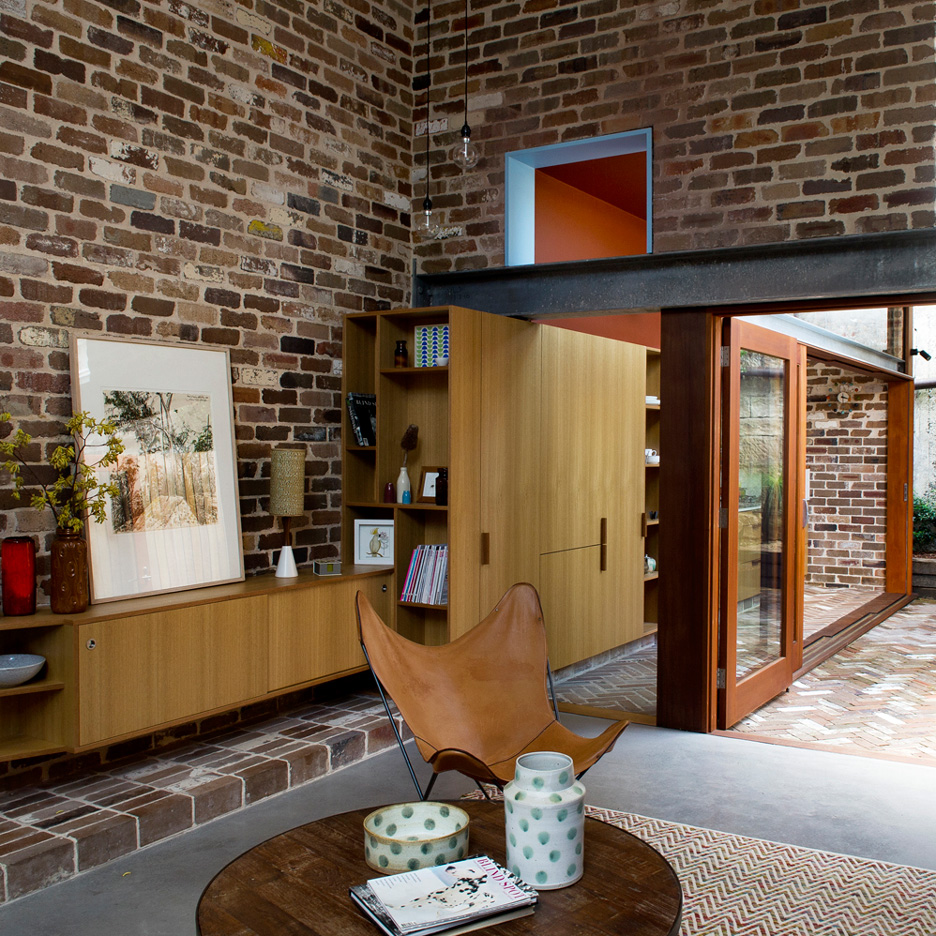 Exposed concrete covers the ground floor, complementing wood bunk beds, a request of the owners who wanted a holiday home that could accommodate one, two or three family groups at one time. In total, the lower level has two master bedrooms, the bunk rooms for the children and "impromptu sleepovers".

On the southeastern corner of this level there is also a shower room with an adjoining garden. It has a door that opens onto a path from the beach, so occupants to wash-off before they enter inside.

"After walking from the beach, a semi-enclosed garden room provides a place to rest," the studio explained.

Natural split state tile covers the floor of the living area upstairs and continues onto the northwestern terrace and barbecue area. The deck of the projected volume meanwhile has a weathered wood floor. A blackened wood wall curves from this deck to adjoin a brickwork fireplace for a wood-burning stove facing a seating nook inside.

Additional details in here are wood built-ins and leather furnishings, set against the backdrop of white-painted brickwork walls and wooden ceilings.

Breezeway House has been longlisted in the house interior project category of Dezeen Awards 2020.

Established in 2002, David Boyle Architect is based in Pretty Beach, a suburb of the Central Coast region of New South Wales. The studio's other projects include the renovation and extension of a psychologist's house in Sydney, which created a double-height living room, a mezzanine bedroom and a home office.