OMA created the open-air terraces – called "sky decks" – high above street level by cutting into the shape of the tower, which is made of four volumes clustered around a central core.

Prince Plaza sits in the sightline of views down from the mountains to the sea, so these terraces are intended to lessen the impact of the building on the skyline while creating more vantage points for the public.

A multi-storey podium at the base of the office tower houses a shopping centre with a rooftop garden.

This shopping centre extends several levels below ground, where it connects Prince Plaza to two of Shenzhen's metro lines.

The golden hexagon-patterned filigree used to decorate the sky decks appears again on parts of this podium, visually connecting the complex.

The hexagonal design creates patterns that appear to rise and fall, chosen to reflect the ridges of the mountains and the waves of water that surround the city.

To bring light into the office spaces of Prince Plaza, OMA set two of the vertical volumes of the tower back from the other two. 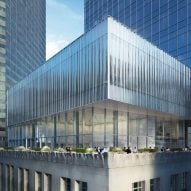 The offset allows more light in through the wide glass panels of the facade and gives the occupants striking views.

Founded in 1975 by Rem Koolhaas Elia and Zoe Zenghelis and Madelon Vriesendorp, OMA has untaken several buildings in Shenzhen, including the Shenzhen Stock Exchange and the upcoming International Conference and Exchange Centre.

Photography is by Seth Powers.