Elon Musk's neuroscience startup Neuralink has revealed the "dramatically simplified" design for an implant that aims to create brain-to-machine interfaces, alongside the robot that inserts it and several pigs that have the device installed.

Musk shared updates of the implant, which Neuralink is developing to connect human brains with computer interfaces via artificial intelligence, in an online presentation last week.

In the presentation, the entrepreneur and Tesla founder unveiled the new design of the chip, as well as the full-scale surgical robot and a group of pig test subjects.

Musk explained that over the past year the company has "dramatically simplified" the wearable device. The previous design consisted of a bean-shaped device that would sit behind the ear.

"It was complex, and you still wouldn't look totally normal; you would have a thing behind your ear," he said about the old design. "So we've simplified this to something that is about the size of a large coin, and it goes in your skull."

The in-brain device could enable humans with neurological conditions to control technology, such as phones or computers, with their thoughts.

Musk also claims to be able to solve neurological disorders from memory, hearing loss and blindness to paralysis, depression and brain damage.

The current prototype – referred to as version 0.9 – measures at 23 millimetres by eight millimetres, and has 1024 electrode "threads" attached to it that are implanted into the brain.

It is designed to replace a coin-sized portion of skull and sit flush so it would be physically unnoticeable. It would be inductively charged, the same way you would wirelessly charge a smartwatch or a phone.

"It's kind of like a FitBit in your skull, with tiny wires," said Musk.

The industrial design for the surgical robot, which is programmed to insert the neural threads safely into the brain, was done by US design company Woke Studios.

The robot would be able to insert the link in under an hour without general anaesthesia, with the patient able to leave hospital on the same day.

"We ultimately want this robot to do essentially the entire surgery – so everything from incision, removing the skull, inserting electrodes, placing the device and then closing things up," said Musk during the live event. "We want to have a fully automated system."

The robot has been used to insert the implant into a number of pigs that are being used to test the device.

As Woke Studios explained, the team wanted to design the machine to suit its clinical setting, while still comforting patients and expressing "the futuristic nature" of the technology.

Comprised of three main elements – the head, the body and the base – the eight-foot-tall robot features a rounded form with soft edges, similar to other, less invasive, medical machines in a bid to give as much of a "friendly-feeling" as possible.

While the majority of the robot is coloured in white, for sterility purposes, the inner surface of the head has been given a light, mint green colour to provide "visual comfort".

Designed "with zero room for error", the head of the machine holds and guides the needle that performs the operation, and contains a large amount of cameras and sensors to capture the whole brain.

The asymmetric body features a "car-like curvature", and provides the mechanics for controlled movement. This part of the robot, which moves in five axes, was designed to make the motion appear "clean and effortless".

The body is attached to the base, which provides weighted support for the whole structure and holds the processing power to operate the entire machine.

Musk also showed viewers the group of pigs that he and his team have been testing the Neuralink implant on during the live presentation.

The implant sends real-time signals from the animal's brain whenever it touches something with its snout. 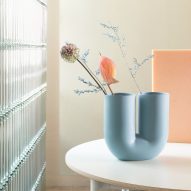 Described as "healthy and happy", one of the pigs was given an implant two months ago, while another pig has dual Neuralink implants, demonstrating that it is possible to have multiple chips in your head at one time.

A third pig has no implant. According to Musk, each of the animals are "indistinguishable" from each other.

Musk also showed a pig that previously had a chip inserted into its brain, but had since been removed, to show that the procedure is reversible without any serious side-effects.

Neuralink received a Breakthrough Device designation from the FDA in July. The startup is now preparing for its first human implantation, pending required approvals and further safety testing.

Woke Studios' design for the Neuralink N1 brain implant was recently longlisted in the wearable design project category for this year's Dezeen Awards.

Other longlisted projects in this category include a carbon-negative raincoat made of algae, a mask that makes the wearer's face undetectable to public facial recognition technology and water-filled headphones that offer immersive sound even for people who are hard of hearing.