New York designer Charlotte McCurdy has fashioned a water-resistant jacket from a plastic made of algae.

The garment is made from a bioplastic material McCurdy developed that consists entirely of biopolymers derived from algae.

"The jacket is carbon-negative because it is made of marine macro-algae that expands our ability to meet our needs with 'present-tense sunlight'," the Rhode Island School of Design graduate told Dezeen.

"This algae plastic is made of carbon that has been drawn from the carbon reservoir of the atmosphere and put into the stock of carbon of our built environment."

The algae are bound together by heat and finally poured into moulds which are custom-made to ensure the plastic survives the curing process.

Once solidified, the algae plastic is given a thin coating of wax to improve its resistance to water.

"I developed an entirely plant-based waterproofing wax because everything available in the market or published formulas were either petroleum-based, relying on paraffin, or not vegan, relying on beeswax," explained McCurdy.

The sewing pattern is cut into the plastic while it is still in the mould, before being assembled into the finished product, which at the moment remains a handmade prototype.

"All of the threads and fasteners that bring the jacket together are also fossil-carbon-free," said McCurdy.

"Metal snaps and viscose threads, which can be made from essentially any plant cellulose, turn sheets of raw algae plastic into a jacket that I pattern, sew, and assemble in my studio," she continued. "My process is fully electric and my studio runs on renewable electricity."

Crucially, McCurdy explained, unlike a number of other bioplastics, her material is entirely made of algae not just "with some algae".

"Three quarters of the surface of earth is ocean," said the designer. "If we want to break our dependence on fossilised carbon, carbon sequestered by algae and turned into durable materials represents an opportunity we cannot ignore."

The raincoat is currently on display in Nature, the Cooper Hewitt Design Triennial – a major exhibition that Cooper Hewitt director Caroline Baumann told Dezeen earlier this year will show "how designers can save the planet".

McCurdy hopes to show that the future of materials is not about no longer using petroleum-based plastic, but rather about "totally rethinking the source of carbon we make our plastics out of". 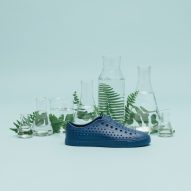 "My project is called After Ancient Sunlight because we have built our society on a dependence on the energy of ancient sunlight," the designer explained. "This is stored in carbon-based chemical bonds formed by ancient photosynthesis."

In other words, plastic is based on carbon molecules that were photosynthesised from sunlight by organisms millions of years ago, before finally being turned into petroleum under the influence of heat and pressure.

McCurdy also created the raincoat to serve a more metaphorical function, raising awareness of the fact that climate change is already manifesting itself in the form of increasingly extreme weather.

She hopes it will act as a symbol of the fact that the tools and technologies we need to fight the climate crisis are already available to us.

"The jacket lets you put on a future where we are no longer dependent on fossil fuels," she said.

"We need visions of desirable futures to work towards in order to catalyse action, not apocalyptic tales of how we are doomed to fail. I believe this kind of envisioning is one role that design has to play in the challenges we face as a society."

From there, she explained, it is up to companies and industries to turn that hope into concrete change.

"We live in a moment where companies are more responsive than governments to the demands of citizens. This is frustrating but it is also an opportunity," she said.

"We don't have time to rebuild our approach to capitalism and then take on climate change, so why not use consumerism as an engine to drive desirable impact the on climate?" the designer continued.

Ancient Sunlight is McCurdy's graduate thesis from the Rhode Island School of Design. For the next phase of the project, she is creating a narrative non-fiction book about materials and climate change in order to help consumers develop the vocabulary to demand the change they want to see.

The raincoat is part of a recent flurry of fashion designs using algae, including a compostable T-shirt, injection-moulded trainers by Canadian brand Native shoes and a series of biogarments by designer Roya Aghighi.

However it is the only one of these projects which is based on a raw material that is entirely, rather than partially, made of algae.