Chicago practice Wheeler Kearns Architects has built a lake house in Michigan with a cluster of buildings clad in wood.

Designed for a young family of four, St Joseph Beach Residence is located on a waterfront plot on Lake Michigan in the town of St Joseph.

Wheeler Kearns Architects created a series of gabled volumes wrapped in horizontal wooden boards for a unified aesthetic. When viewed from the side, three of the rooflines appear to connect in a zig-zagging formation.

The studio built four structures for the residence, two of which are connected to form the main house, in order to create a series of intimate outdoor spaces.

"To break down the massing and scale of both the enclosures and the open site, an arrangement of volumes purposely shapes different outdoor rooms and creates smaller, defined interior living spaces," said Wheeler Kearns Architects.

A grassy front lawn, one-storey garage and a two-storey guesthouse define the front-half of St Joseph Beach Residence, while the rear has an outdoor swimming pool and a partially-covered patio. Glass walls present wide views of the lakefront at the back.

"The site offers two distinct environments, street side and lake side," the studio said. "The street-facing 'neighbourhood' facade is expressed with crisp black-steel, punched openings and a formal entry court."

"By contrast, on the lakeside, floor-to-ceiling glass provides panoramic westward views to the dunes and Lake Michigan." 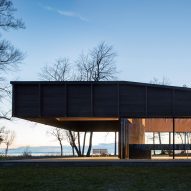 The timber exterior of the house was chosen to withstand harsh winter winds while still having a traditional and maritime feel. Gridded black windows offer a contemporary flair.

Rather than using local or endangered hardwood siding, however, Wheeler Kearns Architects opted for an acetylated or compound wood material for siding called Radiata Accoya, which is known for being more sustainable and rot-resistant.

"Horizontal shiplap wood-cladding and cedar shingles are detailed in a taut, minimal way, and are designed to both protect and weather gracefully in the constant wind coming off the lake," the studio said.

Upon entering the home from the front garden is an entry with a stairwell and a dining room beyond. To one side is a living room, while another portion of the ground floor has a kitchen with another dining space.

The ground floor layout is formed by two rectangular structures that are offset from each other but linked together to form a Z-shaped layout. Upstairs includes a master suite located above the entry and kitchen, and two bedrooms with ensuites and a study above the living and dining room.

The smaller, two-story structure on the property has a two-car garage, mudroom and bathroom on the ground level, and an office, bathroom, guest bedroom upstairs. On this level, a terrace acts as a walkway between the upper levels of the two volumes.

For interiors, the home features ceilings and matching floors and built-ins of white oak. The golden hue contrasts with the grey wood exterior to allude to a sense of warmth.

"Throughout the home, inside and out, finished or exposed, wood captures the ever-changing dance of light, wind, sand and water," said the studio.

White walls and ceilings are interspersed throughout alongside large portions of windows with black steel frames. Munich-based designer Stephanie Thatenhorst created the decor based on wood furniture pieces and accents in black leather, blue and grey tones.

Wheeler Kearns Architects was founded in 1987 by American architect Dan Wheeler after time spent at Skidmore Owings & Merrill. The studio has also designed a low-lying home in the woods of Illinois for a couple north of Chicago.

Other homes on Lake Michigan, which spans the west side of the state and is one of the largest freshwater lakes in the US, include Desai Chia's Michigan Lake House, a dark residence by William Kaven and John Ronan's Courtyard House. All of them are similarly clad in wood, like St Joseph Beach Residence.

Photography is by Steve Hall of Hall + Merrick Photographers.