In the first in a series of daily videos about London buildings and spaces during Open House London, architecture historian and skateboarding fan Iain Borden sheds light on the design of Crystal Palace Skatepark.

The short movie, made by Jim Stephenson of Stephenson/BishopFilms, is one of a series of movies about overlooked and unusual places in the city commissioned by the festival as part of its 2020 programme.

The films are part of the festival's move to diversify its programme and make it more accessible in the light of the coronavirus pandemic, which has impacted the number of buildings able to throw their doors open to the public.

As media partner for Open House London, Dezeen is publishing a different movie every day during the festival, which runs from 19 to 27 September.

Located in south-east London, the concrete Crystal Palace Skatepark was designed by Canvas in 2018 as a free facility for the community.

It was the result of a petition raised by local skaters four years earlier, sparked by a flurry of open-access skateparks being built across the UK by local councils.

In the video, Borden sheds light on the design that comprises three unique sections. This includes a deep clover-shaped bowl, a central medium-depth L-shaped bowl and shallow "street course" with various flat and raised banks.

According to Borden, this layout is unique and makes the park a well-regarded venue within the UK. 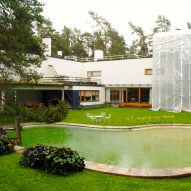 Its most notable feature is the deepest bowl, which has stone coping and tiling. It is modelled on the curved swimming pools typical of suburban housing in California from the 1970s.

However, the design of these residential Californian pools is an evolution of the world's first kidney-shaped swimming pool, which Finnish architect Alvar Aalto conceived for Villa Mairea in Noormarkku, Finland. The skatepark is therefore in effect "a copy of an Aalto original".

Crystal Palace had been a popular location for skateboarding since the 1970s when the sport boomed in the UK.

It was the location of the first UK National skateboard championships, held in 1977, and was home to a world-famous half-pipe in the 1980s.

While many advanced and commercialised skateparks were built around the UK, Crystal Palace maintained its reputation as a hub for the sport.

He explains in the video that it is important to understand that skateparks like in Crystal Palace are "not sports facilities" but instead are vital community spaces that can unite people of all ages and backgrounds.

"In my mind, they're one of the world's great kinds of public space," he concluded.

Open House London takes place at venues across London and online from 19 to 27 September. Videos will be published on Dezeen each day during the festival. See Dezeen Events Guide for details of more architecture and design events.