Design studio Destilat drew focus to the art of winemaking by applying a "reduced colour language" inside Clemens Strobl winery in northeast Austria.

Clemens Strobl is located in the Kirchberg am Wagram municipality of Lower Austria, a region recognised for producing a rich variety of wine cultures.

The winery, which is shortlisted in the large workspace category of this year's Dezeen Awards, is composed of two gabled barns that are connected by a ribbon of gridded glass.

One of the barns has been restored, and still boasts its original brick facade. The other had fallen into a state beyond repair and has been replaced by a contemporary white-painted structure.

The greyscale spaces that design studio Destilat has created within the winery come in response to the brief of the owner, who wanted the interiors to have an understated design so that the craft of winemaking could be the focal point.

"The clients asked for 'as little design as possible' for their premises, and we reacted to this request with a very reduced colour language and design vocabulary as well as an equally puristic material selection," said the studio, which works between offices in Vienna and Linz.

"Grey in all of its nuances puts the winemaking process front and centre."

Off-white Heraklith tiles – which are crafted from a mixture of wood and wool – have been applied across the winery's ceiling, while the floor is polished concrete.

To one side of the ground floor lies a garage and toilet facilities, while on the other is a huge cellar where metal tanks and barrels of wine are stored.

This space is topped by a lofty vaulted ceiling, underneath which a glass-fronted volume has been slotted to accommodate a tasting room.

A two-level module clad in grey-stained spruce wood sits at the centre of the winery's ground floor. At the bottom of the module lies a kitchen that features wine bottle-lined shelves.

A flight of black metal stairs can then be used to reach the casual meeting area that sits up top. 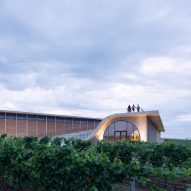 Grey-tinged spruce extends to cover the lengthy walkway that extends across the first floor, leading up to an open-plan office area for winery staff.

Other than a couple of sofas and armchairs that have been dotted along the periphery of the winery, Destilat has otherwise left a majority of spaces empty so that they can act as a "stage" for the natural light streaming in from the windows. The extra room can also be put to use for different events hosted at Clemens Strobl.

Decor is offered by a vintage water well that the studio sourced in Upper Austria.

Destilat is led by creative trio Harald Hatschenberger, Thomas Neuber and Henning Weimer. Previous projects by the studio include a house that cantilevers to create a shelter above its entrance, and a wood-clad residence that staggers down a hillside.

Its Clemens Strobl winery will compete head-to-head in the Dezeen Awards against projects such as The Audo by Norm Architects – a boutique hotel in Copenhagen that doubles up as a showroom and offices for furniture brand Menu.