Hyper-local materials and production processes take centre stage in (Un)finished, a showcase of work by 17 design graduates from the Royal College of Art that was created largely during the coronavirus lockdown.

The exhibition, which was presented at the London Design Festival as part of the Brompton Design District, captures the unique constraints placed on the student's work as a result of the ongoing pandemic and offers thoughts on how design could lead to a more sustainable, connected future.

"A lot of these projects are about what you can adapt to do as a designer, that you can do at home and do locally," Georgia Cottington, a student who helped to organise the event, told Dezeen.

"It's about ingenuity, resourcefulness and making us think about systems and materials," added Jane Withers, who curated this year's reduced, pandemic-friendly Brompton Design District programme.

"None of us has ever experienced anything like this but what I'm interested in is creative responses, so how we can not just carry on but learn from this?"

With campuses closed, the international members of the MA Design Products degree were dispersed around the world, with many losing access to their studios and material supplies.

Max Hornaecker sourced and created a series of earthenware cups entirely within the means available in his family's back garden in Tuscany. After discovering the clay in the ground, he formed it into simple, modern vessels before firing them in a DIY pit.

"Clay is something we all have, everywhere, but it's shipped around the world and we're always using someone else's clay. It's like shipping water," said Withers.

"So this project highlights what's in front of us and calls out the absurdity of the global clay trade."

Another student, Andrew Scott, created the SE17 chair from materials that were entirely found and processed in the London postcode after which the piece is named.

First, he built an analogue lathe on his balcony using only wooden pallets and pieces of a discarded clothes rack, which he then used to turn wood found in a nearby park into the chair's frame.

The seat is made from plastic bags that were collected from East Street Market and twisted into a colourful piece of rope.

Similarly, Oliver Hawkes used the base of a chair dumped on the side of the road as the basis for a new seating design, topping it with a backrest laced with camping rope.

The design is deliberately simplistic, in a bid to draw attention to how easily broken furniture could be fixed rather than discarded.

For her Second Life collection, Maria Ramon Vasquez integrated ceramic shards she scavenged from the banks of the Thames into a complete tableware set, while Lea Randebrock developed a way to turn waste glass fragments, too small to be sorted by colour and industrially recycled, into a water-absorbent material.

Making use of its moisture-retaining properties, the student used the glass to create a ridged tile for growing microgreens such as cress without the need for soil or plastic trays.

"At the moment, the recycling industry is unable to mix different coloured glass but she found a way of combining them together and still being able to make a solid, valuable material," said Cottington.

"It's about exploring those constraints that people think exist and showing that there's actually more that can be done with the material."

Other students tackled the need for increased self-sufficiency in terms of our food, water and electricity supply, which was poignantly reinforced during lockdown.

Anya Muangkote developed a range of products for the domestic cultivation of Spirulina, a highly nutritious edible algae.

While designers have previously created countertop devices for this purpose, Muangkote encourages a more DIY approach through an open-source system of 3D-printed lids and harvesting funnels, which can fit a range of readily available containers.

Another project from Randebrock that was on display in the showcase was The Clay Pantry, a series of 3D-printed clay vessels that allow fresh fruit and vegetables to be cooled and stored without electricity.

The system harkens back to ancient ways of storing food by filling an outer cavity in the vessel with sand, which is watered daily like a house plant to keep its contents fresh.

Graduated designer Eric Saldanha created a wall-mounted device that uses ultraviolet light and airflow to clean clothes rather than relying on water.

Several projects also had a focus on working with the local community, among them Cottington's The People's Quilt. The patchwork was created through a co-design process with the residents of two housing estates close to the RCA, in honour of their 11-year fight to stop the buildings' demolition.

Following a series of pre-pandemic design workshops, each element was embroidered by a different member of the community while stuck at home during lockdown.

"It's quite messy and slow, building that relationship with the community and this visualises that process," said the designer.

"Through making the quilt, I was able to build that trust with them to do a more radical project together with [fellow student] Elliot Lunn, in which we're transforming their unused garages into artists' studios."

While one part of the (Un)finished showcases highlighted the different projects, the other was turned into a temporary workshop with a rota of students in residence, in a bid to make the often oblique design process visible for visitors. 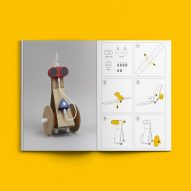 "Because of Covid, we kind of felt that our time at the RCA was unfinished and that we'd lost out on the best bit, which is being in a studio and working collaboratively with people," said Cottington.

"So the idea was that we would also give ourselves a chance to have a design studio, in which each day a different designer builds something that they think is essential to a studio."

Earlier this year, a series of projects from the MA Design Products programme were exhibited at Dezeen's Virtual Design Festival including a modular smartphone and a robotic toy-making kit for children.

As part of the event, several students spoke in a virtual panel talk about how to make technology more human.