Fletcher Crane Architects has designed The Water Gardens Pod, a three-bedroom house below a seventeen-storey high-rise on the Water Gardens estate near Hyde Park, London.

The infill development was commissioned by charity institution The Church Commissioners, the owner of the estate, which was designed in 1966 as luxury residences.

Fletcher Crane Architects fitted out an existing office in the high-rise itself as the main kitchen and living space, wrapped it in glass and connected it to the new pod through a glass link.

The pod, which together with the glass link measures 74 square metres, holds three bedrooms and three bathrooms and is made from cross-laminated timber (CLT) with a tiled exterior.

"It's as if excavated from the tower block and consequentially may not be identified as being a new build addition to a passer-by," he added.

Water Gardens Pod's southern-facing facade is glazed and faces the semi-private water gardens, for which the estate is named. The monolithic north and street-facing sides of the building were given smaller openings.

The Water Gardens estate is fully occupied, which posed a challenge when the pod was being constructed.

"Hence, the choice of CLT, where the speed of construction and off-site fabrication significantly sped up the construction process over traditional methodologies," Fletcher said.

The shape of the new build was taken directly from the existing high-rise, making it seem like it had been "pulled" from the adjacent tower. The studio also took into account the view from the flats above the pod.

"A key aspect considered was overlooking; primarily from above so the fifth elevation had to be carefully considered and composed," Fletcher said. "For residents above, they now have a significantly improved amenity to look out over."

Pale grey mosaic tiles were chosen for the exterior of the pod to connect it with the existing building, which has identical small-format tiles but in white and dark grey.

The colour variation differentiates the pod structure but still ties it to the original design of the Water Gardens tower block. 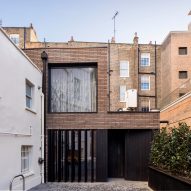 Inside, the CLT was left bare to limit the use of cementitious or plaster-based products.

Fletcher Crane Architects chose to work with the material not just because it has a lower carbon footprint than steel or concrete, but also for its biophilic qualities.

"Research suggests CLT has benefits to human health and wellbeing thanks to better air quality and acoustic quality," Fletcher explained. "Also biophilia means people who just like being around wood!"

A grass sedum garden on the roof contributes both biodiverse planting and insulating properties.

"The Water Gardens Pod represents how a forgotten space can be utilised in a highly engaging way and simultaneously contributes towards the number of new homes in London – without utilising greenfield land," Fletcher said.

"This is a brownfield site; and this kind of location and opportunity can be – and must be – utilised more as a solution to a variety of social and sustainable dilemmas over the coming decades."