London architect Suzanne Brewer has created a prototype wheelchair with only two wheels and a saddle seat that takes the user from seated to standing in one fluid movement.

Called Walking Wheelchair, the vehicle allows its occupant to engage with their surroundings at the height of an able-bodied person, which is beneficial both on a social and logistical level.

"So many situations involve standing, whether it's giving a presentation at work, getting served at a bar or walking down the aisle," said Brewer, who developed the design together with her son Jarvis.

"That's not to mention practical situations such as reaching a shelf in a supermarket or using a kitchen. We noticed how often people in wheelchairs can get lost in a crowd and thought how wonderful it would be if they could have an eye-level conversation."

Although other companies such as Levo, Sunrise Medical and Dassault Systèmes have previously developed standing wheelchairs, these generally rely on four to six wheels to balance the user's weight while the chair unfolds into a flat backboard to hold them upright with the help of knee supports.

Brewer's two-wheeler features a more streamlined design that aims to emulate the natural motion of standing, with a seat that rises straight up like that of a desk chair.

"The patent-protected technology is the saddle seat, which lifts the body vertically and enables the legs to rest on either side, creating the illusion of standing," Brewer told Dezeen.

"The other important technology is the Segway-style wheelbase, which is much smaller than the conventional base of an electric wheelchair. It has a tighter turning circle and is lighter because it does not rely on weight to balance the body." 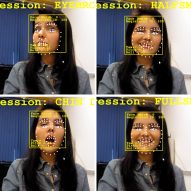 As Brewer and her son had never previously developed a prototype and lacked the budget to create the individual components from scratch, they sourced different parts through the internet and "frankensteined" them together with the help of trained engineers

"I ordered the wheelbase from Slovakia because it was cheaper in Euros and most importantly can be controlled using your torso or a joystick rather than your foot," said Brewer.

"The piston, which lifts the saddle seat, is made from the leg of an electric standing desk and the seat belt I found on eBay."

"My architectural skills helped enormously, even if subconsciously," she continued.

"I could visualise how we wanted the end result to look and function, much as you do when designing a building, and I understood how the components would work together even if I couldn't wire them up myself."

The resulting prototype is designed to look more like an "aspirational and desirable" car prototype than a disability aid, with white leather upholstery and a shiny chrome frame. 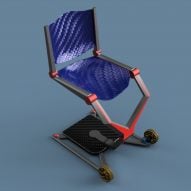 The height to which the seat rises can be adjusted, in order to vary the amount of weight that is carried through the legs. According to Brewer, this helps to prevent the loss of bone density, which can be caused by extended periods of immobility.

After being reviewed by the Back Up Trust, a charity supporting people with spinal cord injuries, and at Stoke Mandeville Hospital, the design is close to being tested in the field.

"We are at the limits of our funds and knowledge so our aim now is to find someone, with proven capability, to progress the design and bring it to market," said Brewer.

The architect founded her practice in 2007, off the back of her Courtyard House being named a finalist for both the RIBA awards.

As her first foray into product design, the Walking Wheelchair has seen her shortlisted in the product design category at this year's Dezeen Awards.

Among the other selected projects is the modular Nestbox, which can turn a car into a camper, the Moxie smart robot companion for children and a low-cost, pocket-sized HIV test for users in developing countries.