ETH Zurich postgraduate student Reto Togni has developed a prototype wheelchair shown at Dutch Design Week, which is steered by leaning from side to side.

The Reagiro wheelchair is designed to give users greater control while allowing them to change direction without breaking or slowing down – something that Togni says is not possible with traditional wheelchairs.

"The Reagiro introduces steering in the design of manual wheelchairs or, more specifically, steering by leaning," Togni told Dezeen.

"This unlocks a natural and dynamic way of moving, facilitates easy one-handed propulsion and stimulates trunk activity while relieving the hands and shoulders."

A large bearing at the back of the chair enables the backrest to move from left to right, while flexible Bowden cables – also used to form the brake and gear cables on bikes – connect the backrest to the front wheels.

To change direction without slowing down, users only need to lean from side to side on the backrest. This movement triggers the bearing and is passed down the cables to the front wheels, which rotate left or right.

The prototype wheelchair, which is currently in an early design-for-manufacture stage and being tested by wheelchair users, is the outcome of Togni's doctoral studies on motion control in manual wheelchairs.

His aim was to solve a common problem associated with conventional wheelchairs, where changes in direction are controlled by one-sided breaking and inevitably disrupt their forward movement.

This type of manoeuvre is useful when turning in tight spaces, according to Togni, but is less beneficial for those wishing to move quickly or for those suffering from arm fatigue or injury.

"[It] renders wheelchair propulsion hugely inefficient as every change or adjustment to direction simultaneously slows down the movement," he explained. 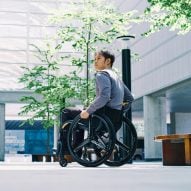 Wheeliy 2.0 is a foldable wheelchair designed to "blend in with the city"

Critics of The Reagiro have argued that many wheelchair users have limited control over their upper body, often making sideways movement difficult or even impossible, which is why traditional wheelchairs are generally designed to support and stabilise the upper body.

In response, Togni conducted a study to determine how The Reagiro could be customised to suit the needs of people with tetraplegia, who are unable to voluntarily move the upper and lower parts of their body.

"Manual wheelchair users across a broad spectrum of physical abilities have shown that only a few customisation steps are needed to meet the needs of a much larger group of people than initially expected," he explained.

Togni says his research also showed that manual wheelchairs with "simple mechanisms" are preferred over hi-tech options by most wheelchair users.

"Conversations with users of assistive devices confirmed that many prefer simple mechanical systems over hi-tech solutions and look for devices built for movement and activity according to individual abilities," he said.

Another wheelchair intended to make life easier for users is Wheeliy 2.0, a foldable model by Japanese startup studio Quantum, which is lighter than most traditional wheelchairs and easier to fold.

Other designs on show at Dutch Design Week included a pavilion made from colourful solar panels by architecture studio V8 Architects and a rug that visualises the consequences of climate change-induced drought.

The image and video are courtesy of Reto Togni.

The Reagiro was on show from 21 to 30 October as part of Dutch Design Week 2022. See Dezeen Events Guide for an up-to-date list of architecture and design events taking place around the world.