Scullion Architects has renovated and extended a terraced Victorian house around a plant-filled courtyard for a young family living in Portobello, Dublin.

The two-storey dwelling, aptly named Portobello, was updated to introduce light-filled spaces and a connection to nature to help the owners disconnect from the bustle of the Irish capital.

To achieve this, Scullion Architects lowered and extended the ground floor, and created an enclosed garden that is visually connected to every room through large windows.

"[The clients] were keen for us to find ways to emphasise a relationship with nature despite a very small garden footprint and the dense urban location," the studio told Dezeen.

"The house and extension gather themselves around the sunken courtyard generating their own world apart and a sense of removal from the busy city beyond."

Like many Victorian houses in the area, Portobello's original layout had an entrance and living room on a half-landing level at the front of the house, with a split-level stair to bedrooms above and a kitchen and garden below.

To maximise space and improve this layout, Scullion Architects excavated the former living room by 1.2 metres to align it with the garden and ground floor.

The old living room has now been transformed into Portobello's double-height kitchen, which forms the heart of the dwelling and is seamlessly connected to the rest of the ground floor.

It is filled with white cabinetry and lit by its original south-facing bay window, which now resembles a large clerestory opening and features a stepped plinth at its base to allow the family to look outside.

"The client stated at the outset they wanted an open kitchen and dining area that would be the heart of the home, and that it must capture the south light to the front while somehow retaining an uninterrupted connection to the rear courtyard," explained the studio.

"They asked us for rooms filled with light with floor to ceiling windows whilst retaining a sense of warmth, comfort and retreat from the city."

Portobello's entrance area's split-level stair has been retained and the original door to the living room has been turned into a large window to offer a view into the kitchen.

The hallway also provides a glimpse of the new densely planted garden on the ground floor via the floor-to-ceiling glazing in the bathroom, located at the bottom of the staircase.

The dwelling's other ground-floor spaces, which fold around the courtyard, were all introduced as part of the home's extension.

This includes a living and dining room that extends out from the kitchen, alongside a garden bedroom and sky-lit shower room. 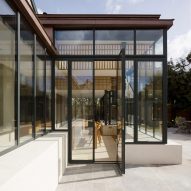 Portobello's first floor was also extended as part of the project to create space for a larger master bedroom and ensuite, which sits adjacent to a third bedroom for one of the client's children.

The master bedroom looks out over the courtyard and also features an internal hatch-door that looks into the kitchen below.

Externally, the ground and first-floor extensions are unified by their large glazed areas and wooden cladding, which has been stained dark green.

The wooden panels are arranged in alternating positions, appearing as though they have different widths and thicknesses to give the facade "rhythm and animation".

Interior finishes throughout Portobello are earthy and tactile in an effort to enhance the home's relationship with nature further.

This is most evident in the main bathroom on the ground floor, which was designed to offer a "sense of retreat and withdrawal". It is has a pebble-lined floor and dark timber detailing, and is complete with a view to the courtyard through a plant-filled pergola.

Elsewhere, a partially-exposed timber structure crowns the ground floor extension, teamed with rough plaster and timber-lined walls, while marble countertops fill the kitchen, and timber and concrete flooring run throughout.

Scullion Architects is an Irish architecture studio based in Dublin, which was founded by Declan Scullion in 2016.

Other recently completed projects by the studio include a house extension that takes the form of a glazed sunroom with copper parapet and the Blackrock House on the outskirts of a seaside village near Dundalk.

Photography is by Fionn McCann.