Vietnamese studio Sanuki Daisuke Architects has designed a townhouse for a family in Ho Chi Minh City around three cavernous rooms open to the elements.

As there was not enough space for a large garden, Sanuki Daisuke Architects' design brings the outside in via three living spaces with openings that allow light, rain and wind to enter.

These spaces are described by the studio as "outdoor rooms" and are characterised by sweeping arched forms, or vòms in Vietnamese, which gives the house its name.

"As seen in typical Vietnamese townhouses, this site was so tight that there was almost no garden available, but the clients wanted an open house with a bright, spacious outdoor space," said the studio.

"The design became about how to create a unique and attractive outdoor space where people can feel closer to nature, by taking light and wind in the house in such a tight area," it explained.

"Many 'outdoor rooms' create an open and rich living space. We proposed a tropical living space where the family can always feel close to nature under these large arch spaces."

Vom House rises 15 metres in height and contains three storeys. It is entered via the largest of the three arched "outdoor rooms", located at the front of the ground floor.

This space is two storeys high and contains the main living area, separated from the outside by only a patterned, steel mesh. According to the studio, it will be used as a coffee shop in the future.

The living room leads into the second arched space positioned at the rear of the ground floor, which contains the kitchen and dining area, while the third is on the first floor and used as a study.

Vom House is complete with a library, bathrooms and a maid's bedroom, which are positioned around the edges of the house, and two family bedrooms on the second floor.

The floors of the house are connected by a large, white terrazzo staircase on the east edge, while the second-floor bedrooms are connected via a bridge that overhangs the first floor.

This staircase ends at a roof terrace that runs the length of the house, which is punctured by a void that brings light through the heart of the house.

Each of Vom House's arches is structural and built from concrete that was cast in-situ using woven-bamboo formwork, which produced a rough-textured finish.

This concrete is left exposed and is intended to give the "outdoor rooms" a cavernous aesthetic so the residents feel as though they are outside. 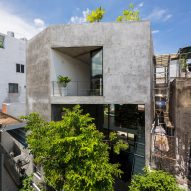 "If the arched concrete ceiling was painted white and abstracted, it would create a monotonous, clean, gallery-like space, which goes against the concept of living outdoors," the studio's founder, Sanuki Daisuke, told Dezeen.

"So we chose a raw concrete finish with woven bamboo sheets as the framework, preserving the raw materiality of the concrete to create a rough, cavernous outside space."

To enhance the cave-like feeling of the arches, Sanuki Daisuke Architects lined the floors with stone and terrazzo and contrasted them with white-painted walls and warm wood detailing and furniture.

There are also full-height trees embedded into both the ground and first floors that help maximise the family's connection to nature.

This includes NGA House, a dwelling with double-height glazed walls that draw in light, and the Hem House that features patterned grills over its windows.